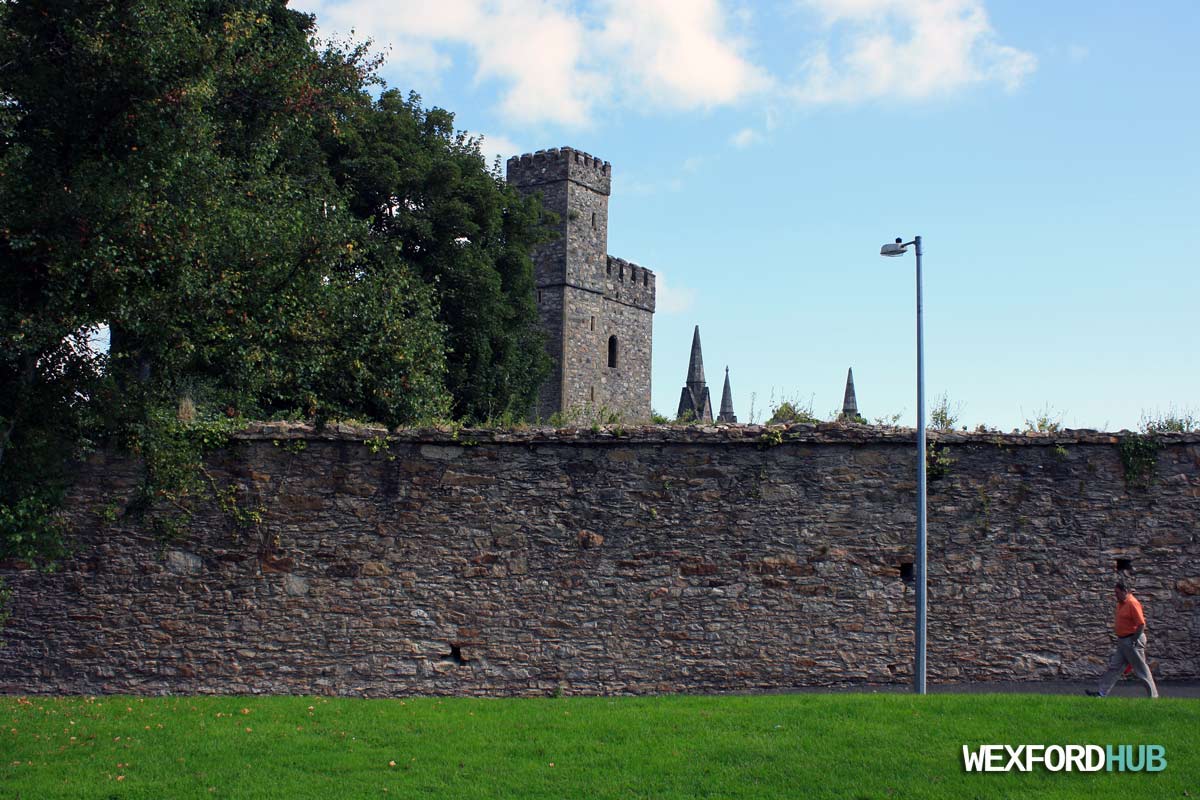 The western side of Wexford’s town wall. Located close to the remnants of Selskar Abbey.

During the 12th century, the Norse-Irish town of Wexford underwent many changes. In 1169, the town was besieged by a Norman force that had landed in Bannow Bay. This small army, which was led by Robert Fitz-Stephen and Diarmait Mac Murchada (the recently-deposed King of Leinster), took control of the town after its inhabitants surrendered on the advice of two bishops.

In the years that followed, a wave of Norman influence began to alter the fabric of the town.

One of the most-striking additions to Wexford during this period was the construction of a stone wall, which “looped” around the town in the shape of a “C”, running from West Gate and Selskar Abbey to the site of Wexford Castle in Barrack Street. This wall encompassed an area of roughly 240,000 square metres (24 hectares).

A map of the town wall can be seen below: 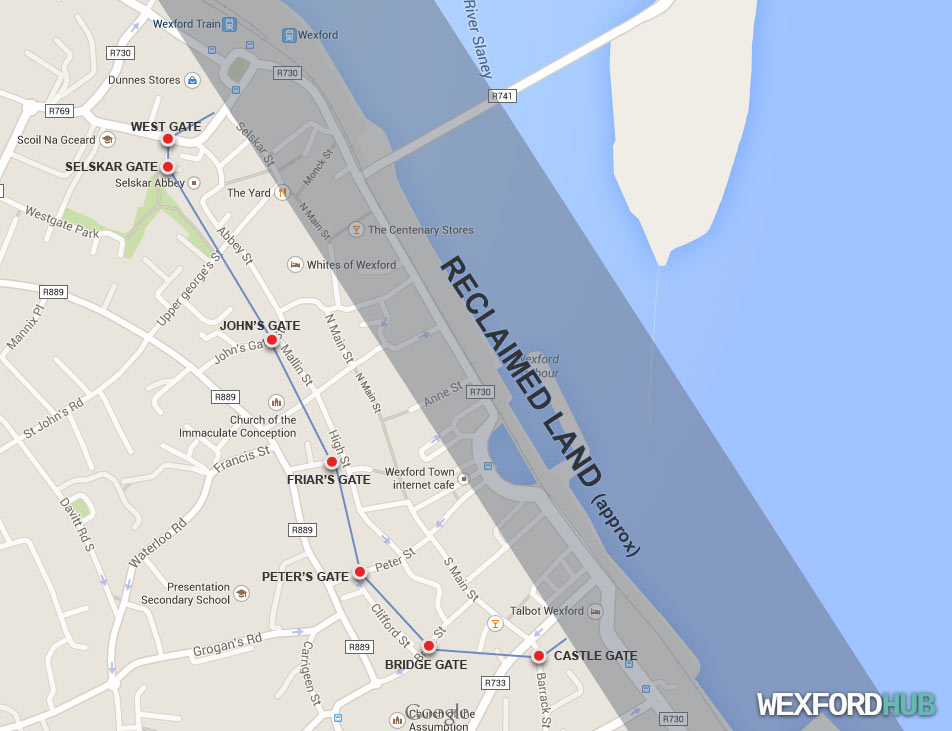 The red dots on the map pinpoint the locations of the town gates, of which there was seven. These gates provided access to the walled town of Wexford:

Almost all of the gates that are listed above were removed by the Wexford Corporation back in the late 18th century; a decision that was made to facilitate the growing levels of traffic within the town.

The darkened part of the map that is labeled “Reclaimed Land” marks the general area of Wexford’s shoreline that was reclaimed in later years. i.e. When Wexford’s town wall was first built, the waters of the harbour came in much further than they do today. In those days, places such as Redmond Square and the Crescent Quay were a part of Wexford Harbour! In fact, the water came up so far that Temperance Row outside of Selskar Abbey was used as a loading bay for sheep (hence it’s previous name, the “Hai Bay”).

Along the wall, you will find three publicly-viewable “Mural Towers”, which allowed the inhabitants of Wexford to defend large stretches of the wall. 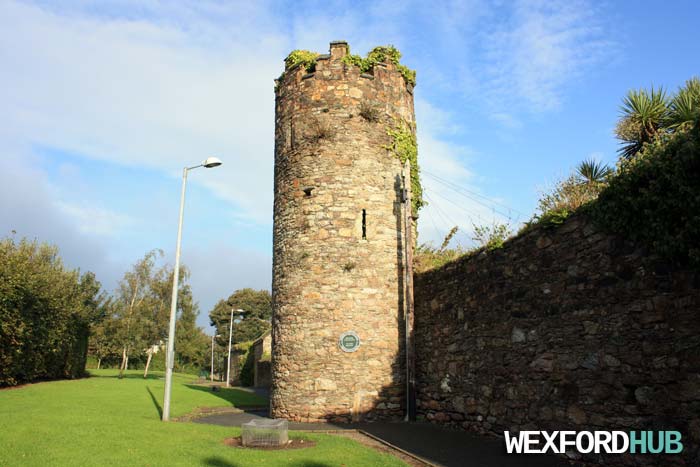 A cylindrical mural tower that is located close to George’s Street. 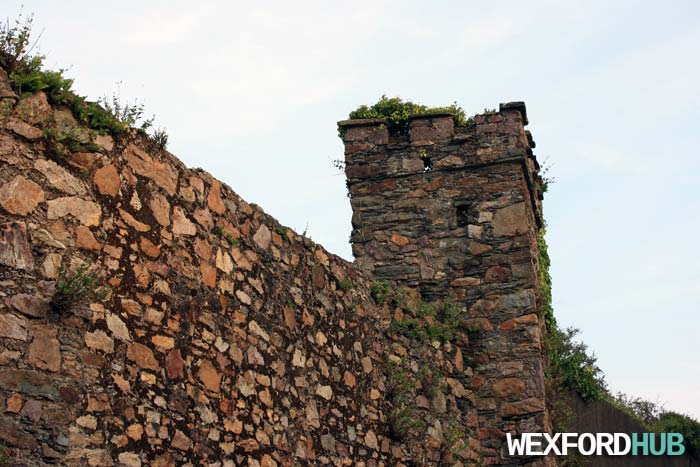 It wasn’t until the 13th century that mural towers began to take on a more cylindrical shape.

The part of the wall that runs from Abbey Street to Selskar Abbey is still standing, which suggests that it was built at a later date (as noted above, the existence of cylindrical mural towers also reinforces this theory). Many parts of the southern section of the wall (from High Street to Barrack Street) failed to survive; possibly due to the damper marshy grounds that it was built on.

It is presumed that construction of the wall began in the early 1200s. If we extrapolate the time that it took to build similar walls in other parts of Ireland, then we can assume that it took roughly 50 years to build the walls around Wexford Town. 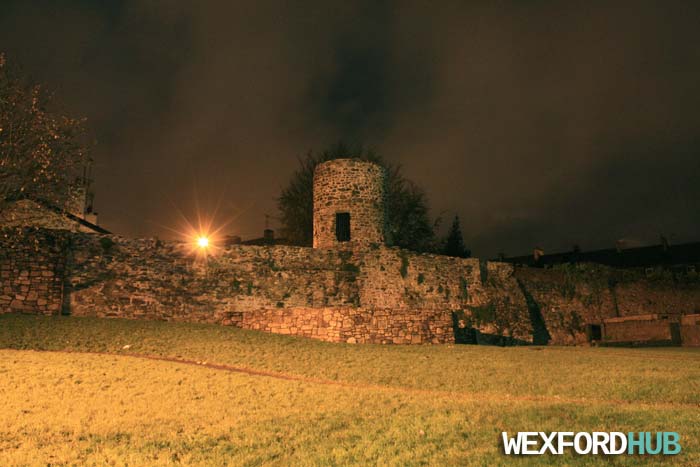 A circular mural tower exists at the wall in Abbey Street.

Over the years, it is highly probable that the wall around Wexford Town needed ongoing maintenance work. References to toll collections for “the repair of the town’s defences” during the 1300s lend credence to this theory. During the 1500s, the mayor of Wexford felt that the walls around Wexford were in such a bad condition that they had effectively left the town in a defenceless state. As a result, he asked for a rent amnesty of sorts – the idea being that said rent money could be directed towards the cost of the repair work.

The cost of maintaining the walls seems to have created a bit of a divide between northern halve of the town and the southern halve; both of which were given the responsibility of maintaining their respective parts of the wall. During a court hearing in the 1400s, it was heard that the south side of Wexford Town was able to generate more revenue than the northern halve. The court concluded that both sides should combine their revenue and that maintenance work should be carried out without preference for north or south.

In recent times, the wall in Abbey Street was “preserved” and repaired to a certain extent, making it look younger than what it is (lime mortar was used instead of cement, I’m assured). From what I’ve read; the reason they don’t restore structures like this to their original state (colour, etc) is because doing so may confuse or impede the study of the wall by future generations. When it comes to historical structures, it seems as though preservation is favoured over restoration.