Barrack Street is situated in the southern half of Wexford Town. It runs from the intersection between South Main Street and King Street to Parnell Street, opposite Lambert Place. The street is named Barrack Street because it is the location of a military barracks that dates back to the 18th Century. 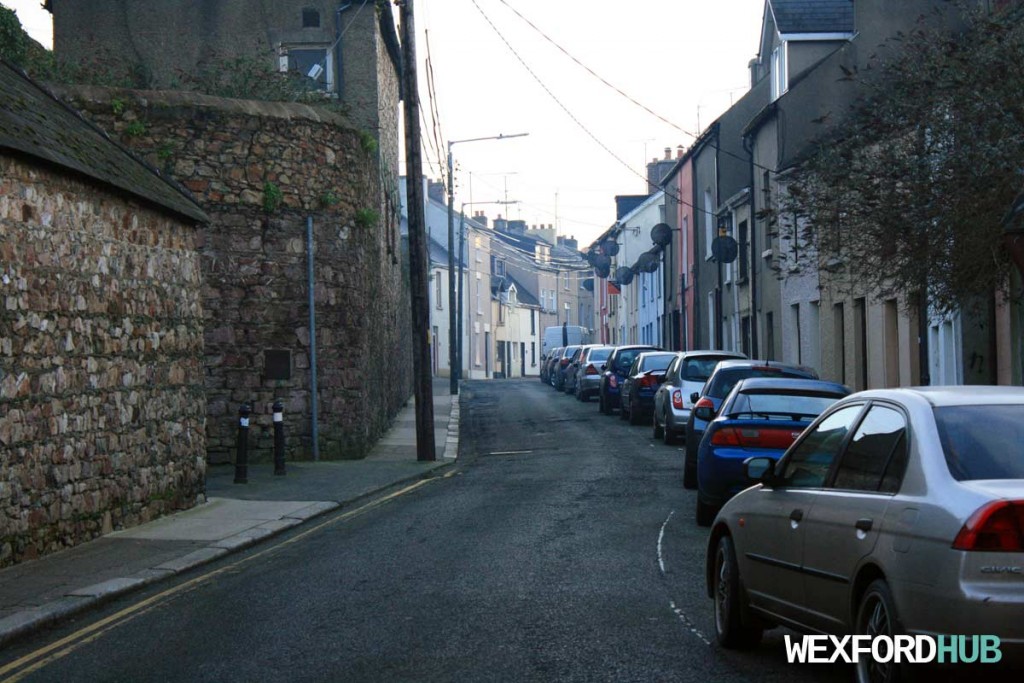 Above: A photograph of Barrack Street. This was taken in December of 2014. On the left, you can see the entrance to the Wexford Town military barracks.

The barracks was opened in 1725. Before its construction, the location was home to Wexford Castle, which was a 12th Century Norman castle that was demolished to make way for the new military base. During the 1800s, there is evidence to suggest that the barracks was also used as a gaol.

During the 1920s, it was renamed as Macken Street (possibly after Peadar Macken, who died during the 1916 Rising). However, this change was later rejected during a plebiscite vote in 1932.

Believe it or not, some of the houses on this street are believed to date as far back as the late 1700s and the early 1800s. Castle Gate, which was one of the six gates that provided public access to the walled town of Wexford, was situated on the street.

During the mid-1990s, an old defensive ditch dating back to pre-Norman times was discovered on Barrack Street. It is believed that this ditch was a part of the original defensive structure that was in place before the Normans arrived during the 12th Century.

According to historical records, there were two Norse-Irish churches in the area. These were The Church Of The Holy Trinity and St. Doologue’s. It is believed that the ruins of these churches were used to repair the structural damage that had been caused during Cromwell’s siege of Wexford in 1649. Unfortunately, no physical trace of either church remains.

The street is connected to Trinity Street and the car park at Talbot Hotel via a small pedestrian lane. This lane is called Slaughterhouse Lane (also known as Salthouse Lane).

The 1901 Census tells us that families such as Howlin, Whitty, Cullen, Murphy, Kehoe and Dunbar lived on Barrack Street in 1901. A few examples of the households that were recorded:

A map showing the location of Barrack Street in Wexford Town: