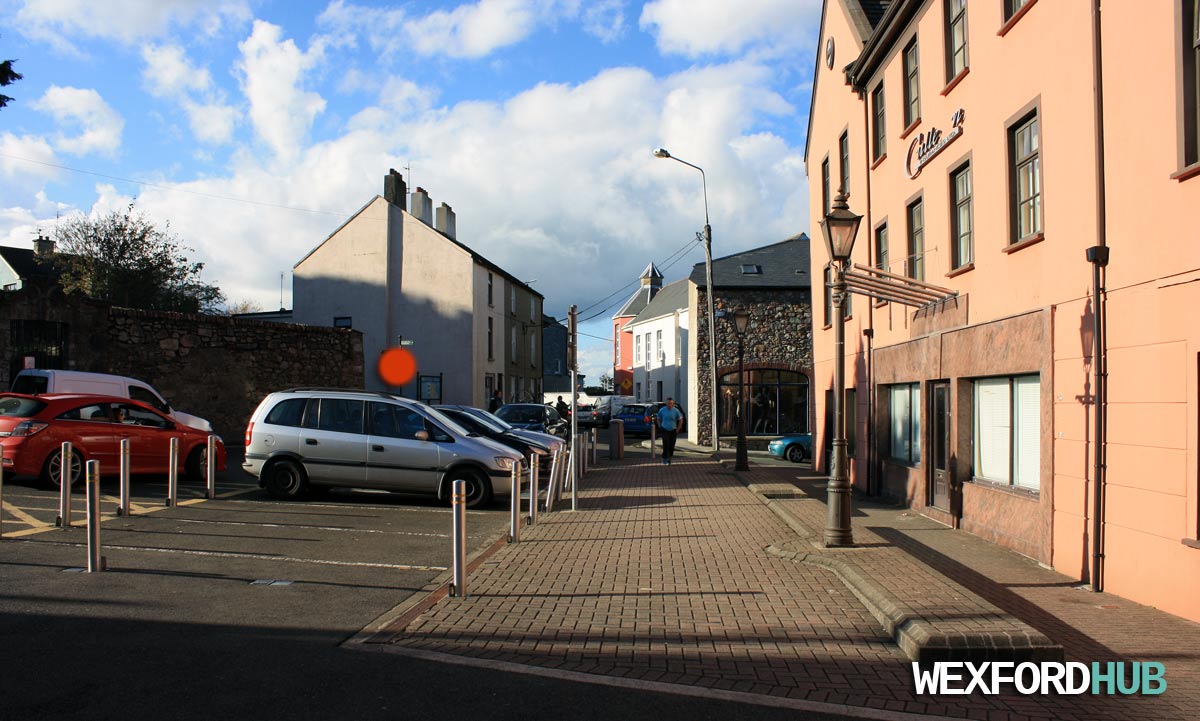 A photograph of Temperance Row in Wexford town.

Temperance Row is a small street that is situated in Wexford town. It runs between Westgate and the intersection between Trimmer’s Lane and Abbey Street. The street is probably best known for the view that it provides of Selskar Abbey, as it runs alongside the eastern walls of the abbey’s grounds. Temperance Row also connects to Selskar Street via a small street called Well Lane.

The street was named after Temperance Hall, which was once situated across from Well Lane, beside the walls of the abbey. The building was built during the 19th Century. In the photograph above, we’ve marked its location with a red dot. Temperance halls became popular as a result of the “Temperance movement”, which was a social movement that was against the consumption of alcohol. These halls were intended to act as a recreational replacement for bars – allowing people to read and partake in other cultural activities in an alcohol-free environment. The Temperance hall in Wexford was built after a visit to the town by Father Theobald Mathew in April of 1940. Father Matthew was one of the main driving forces behind the Temperance movement in Ireland, having founded the Cork Total Abstinence Society in the 1838.

In later years, Temperance hall was used as a lecture hall for the Mechanics’ Institute, which was an educational establishment that was originally formed in order to provide adult education.

In the past, this street was given labels such as Le Cowstrette (labelled on a map from the 1500s), Cowgate Street and Cow Street. It was also called Hey Bey (or Hai Bai) on a map dating from the 1800s. One explanation for this interesting street name is that “Hey Bey” was derived from the sound of bleating sheep, which were often kept on Temperance Row overnight before being sold.

The area where Temperance hall once stood is now a pedestrian walkway that provides access to Westgate Tower and Tower Court.

Nowadays, the street is home to businesses such as St. Vincent de Paul (SVP), which operates a shop on the corner of Well Lane. In the past, it was also the location of the Wexford branch of Culleton Insurances Ltd. However, in 2011, the company decided to exit the personal home and motor insurance market – closing several of its offices in the process.

A Google Map showing the location of Temperance Row in Wexford town: