Redmond Square is one of the main focal points of Wexford Town. The square is dominated by a stone monument, which was built to commemorate the Redmond family and its long-standing ties with County Wexford. One of the most famous members of the family was Home Rule MP John Redmond (1856 – 1918), who was an Irish nationalist politician that was born in Kilrane. He is best known for having led the Irish Parliamentary Party and for achieving Home Rule for Ireland in 1914. His grave site is situated in a mausoleum on John Street.

Pictured above: The monument in Redmond Square, which is situated across from O’Briens sandwich bar, Sam McCauley Chemists and the medical centre. The red shop in the background is a Polish food store called Polonez. In the recent past, this premises was occupied by a book store called Hughes & Hughes. Unfortunately, the Hughes & Hughes book store chain was forced to close in February of 2010 when the company went into receivership; citing falling consumer demand and an inability to renegotiate its rent prices.

One of the plaques on the Redmond memorial statue is dedicated to William Archer Redmond and Major Willie Redmond. William Archer Redmond was an MP for the Wexford borough between 1872 and 1880, whereas Major Willie Redmond (1861-1917) was an Irish nationalist politician and soldier that lost his life in World War One. Redmond Park on Spawell Road was later opened in his memory.

An inscription on the opposite side of the stone monument pays homage to those from Wexford who lost their lives in the Great War: “In memory of all from the town and county of Wexford who fought in and died during the Great War 1914 – 1918.” 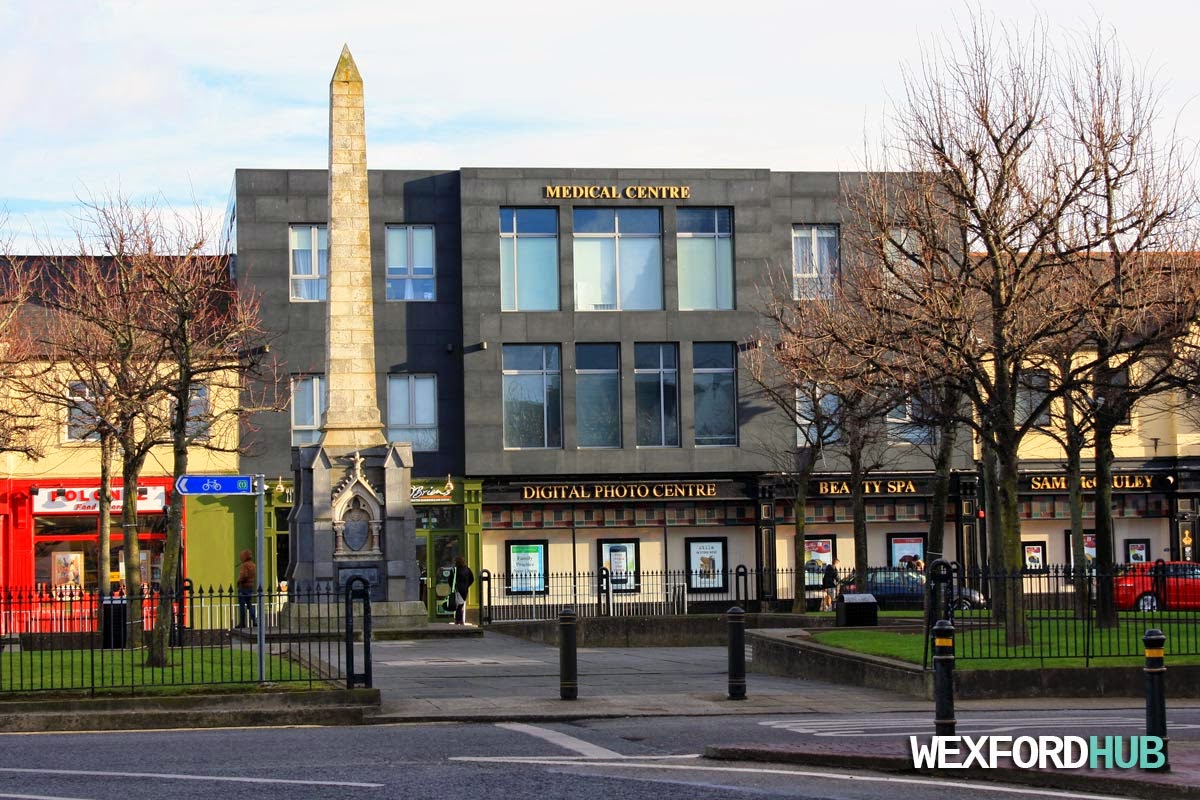 In the late 1980s and early 1990s, Redmond Square was redeveloped. Before its redevelopment, the area was relatively empty and lacking in retail activity (the seating area, the grass and the trees around the monument didn’t exist). In some of the old pictures of Redmond Square, you can see that the area around the monument was completely flat and that the locals were very fond of parking their cars beside it!

During the holiday season, the square becomes home to a Christmas tree and fairy lights, which are used to decorate the trees. In the summer months, you’ll find that the square is teeming with activity, as people relax in the grass and shoppers take a much-needed break from their busy routine. The square is also known to host special events; with the Wexford Food Festival being a more recent example. 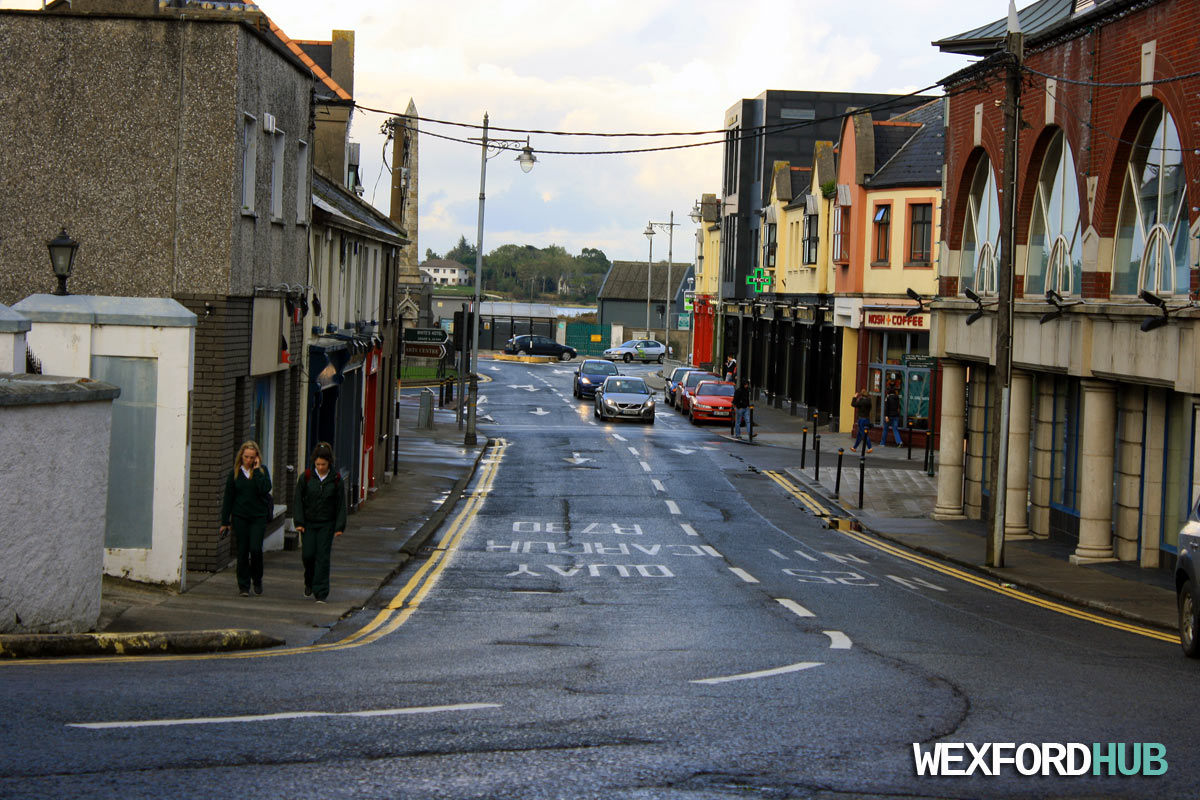 Pictured above: Looking down at Redmond Square area from Westgate. This particular street is called Slaney Street. Nosh Coffee is visible on the right, where movie rental store Xtra Vision used to be before it moved to its new premises on North Main Street.

This street is called Slaney Street because the River Slaney used to flow up as far as the corner beside Nosh Coffee. This remained the case until a major land reclamation project was undertaken in the 1800s. Before the land was reclaimed, the ground that Redmond Square is built on was just another part of the Slaney’s river bed! The Redmond family were an instrumental force behind this land reclamation project. 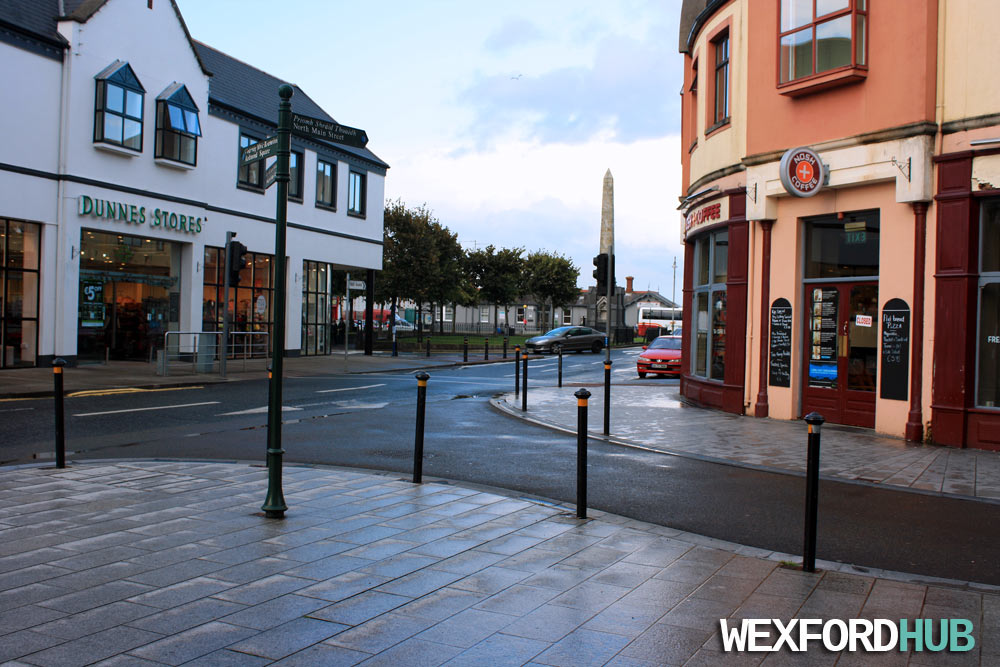 Pictured above: Redmond Square, as seen from the corner of Selskar Street, across the road from Nosh Coffee. The main entrance to Dunnes Stores is on the left. The Redmond monument and Wexford’s O’Hanrahan train station are visible in the distance.

In the past, the area was home to a number of different businesses, with some notable examples being Doyle’s Selskar Ironworks and Patrick Meyler’s garage. Back then, the area was commonly referred to as Redmond Place. 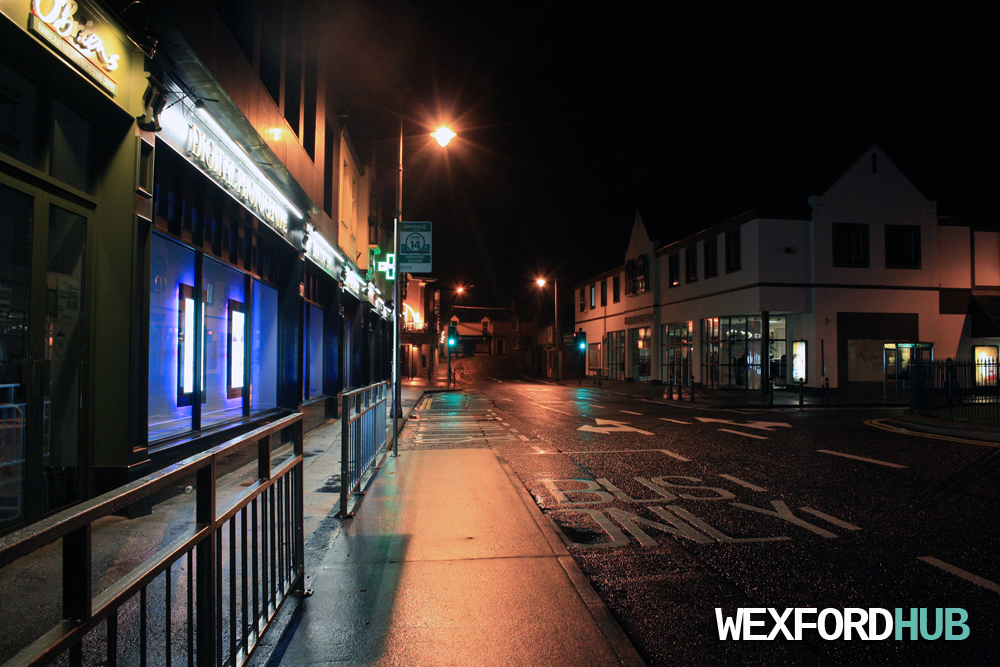 The photograph above was taken after a heavy thunder storm had passed, which would explain why the streets were so empty! 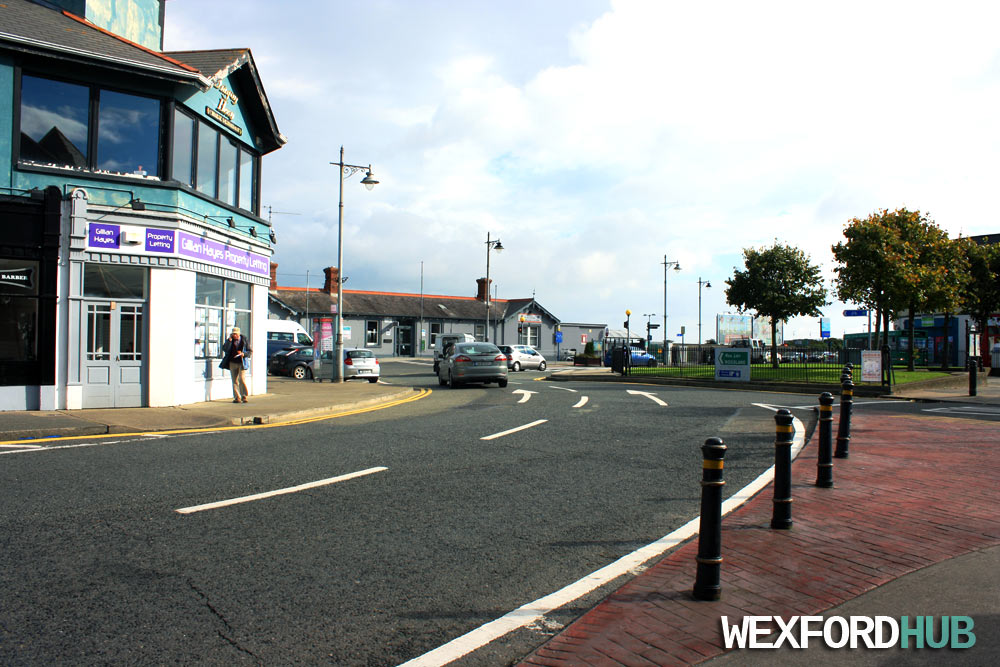 A Google Map showing the location of Redmond Square: