The Franciscan Friary in Wexford was founded during the middle of the 13th Century. Originally, it was a small chapel and graveyard that had been set aside for the Knights Hospitallers, which was a Catholic military order that had arrived following the Norman invasion of Ireland in the 12th Century. 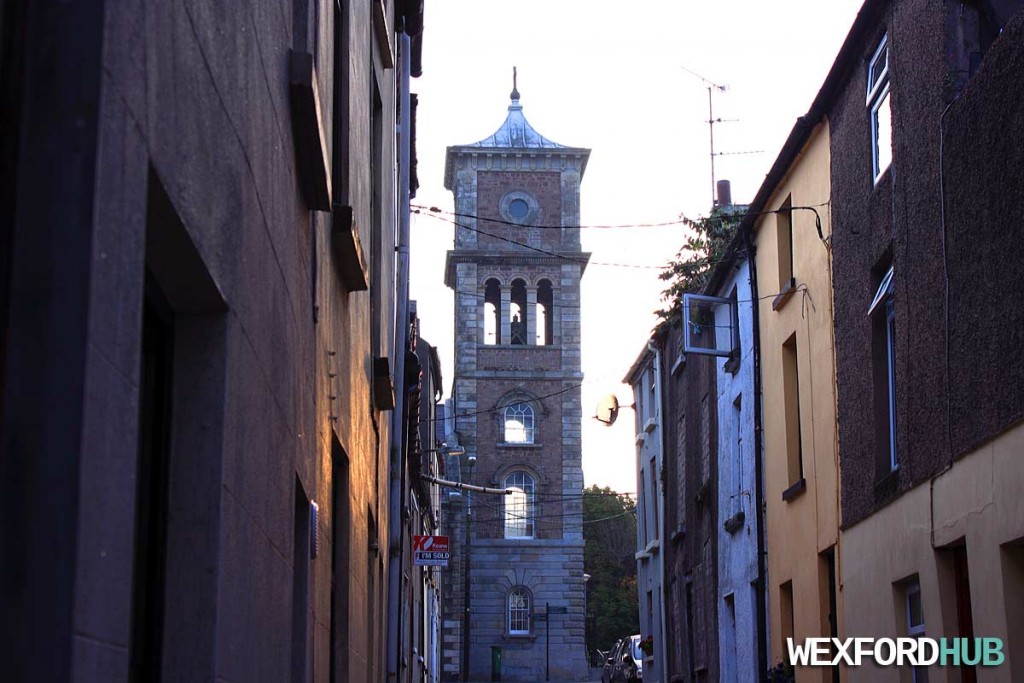 Photographed above: The bell tower of the Friary, which stands out as its most prominent feature. The tower overlooks Mary Street, which was once the site of Friar’s Gate (the Friary would have stood outside of the walls of Wexford Town). The bell tower was added to the building back in 1856.

The small chapel and church that the Franciscans inherited was given to them by Maurice Fitzgerald, who was a member of one of the leading Anglo-Norman families that had invaded Ireland. 800 years later and the religious order still occupies this part of the town.

During the 16th Century, King Henry VIII made the decision to form the Church of England and separate from the Catholic Church. From 1536 onward, Catholic monasteries were disbanded and their income was appropriated. During this period, the Friary in Wexford was confiscated and handed over to lay tenants that were loyal to the crown and Protestantism.

In the period that followed suppression, the Franciscan order in Wexford was forced to lie low and carry out their religious practises in secret (helped by their friends and supporters in the town).

In 1620, the order rented a thatched house on High Street, where they gave a daily mass. This house was situated on the corner of Archer’s Lane, which no longer exists. In 1622, it seems as though the Franciscans managed to regain control of the Friary.

Following the arrival of Cromwell in 1649, Catholicism was repressed and the site fell into ruins. Harsh Penal Laws were introduced in order to try and force the Irish Catholic population into accepting the reformation (these laws were also an attempt to maintain the status of the Protestant ascendancy, which had gained a lot of wealth and power in the years that followed Cromwell’s conquest of Ireland).

By the middle of the 1700s, the Penal Laws had become more relaxed and Catholics had regained some of their religious freedoms. During this period, the Franciscan order in Wexford regained ownership of the Friary before opening a chapel. It was during this period of time that the Friary became the parish church of Wexford, as many of the old Norse-Irish churches had been destroyed. The Friary remained as the main parish church for Wexford Town up until the opening of the Twin Churches in 1858 (the “Twin Churches” refers to Rowe Street Church and Bride Street Church, which are two Catholic churches that tower over Wexford’s skyline).

In 1984, it was discovered that the internal wooden structure of The Friary had become infested by dry rot; a type of decay that is caused by fungi. As a result, a major fundraising effort took place to raise funds for the building’s treatment. Between 1984 and 1987, while treatment and repair works were being carried out on the building, the Church of Ireland allowed the Franciscans to use the St. Iberius Church on North Main Street.

Interestingly, some people believe (or used to believe, rather) that an old underground tunnel used to connect the Franciscan Friary with Wexford Quay. The story of the tunnel is likely to be a myth, however.

A map showing the location of The Friary, which is situated on Francis Street and Lower John Street in Wexford Town: