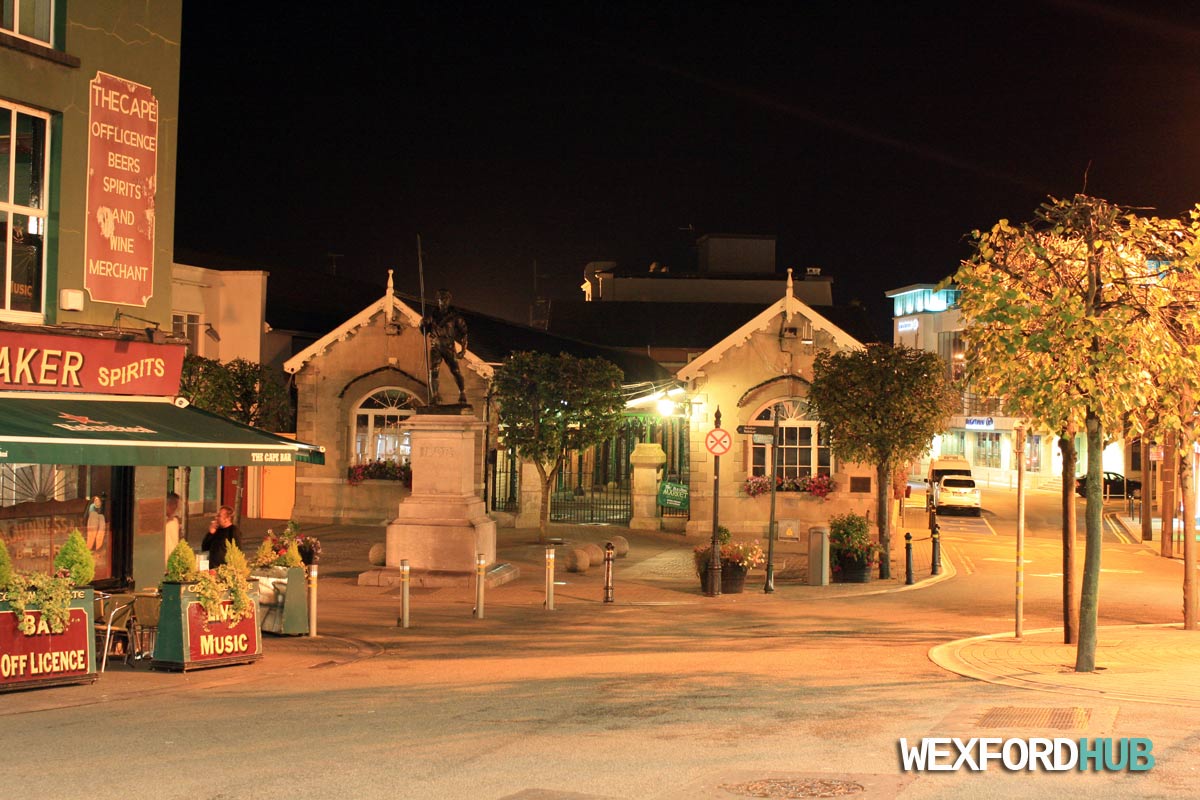 Pictured above: Wexford Town’s Bullring at night. On the left, you can see a popular bar called The Undertaker (also known as Macken’s).

Wexford’s iconic Bullring got its name from a blood sport called Bull-baiting, which involved chaining a bull to an iron stake before setting specially-bred dogs on it. These “bulldogs” were continuously set upon the bull, one after the other, until it eventually became immobilised. In 1621, the Guild of Butchers brought the “sport” to Wexford when they took up the task of organising a biannual Bull-baiting event in an area of the town that was known as “the common plain of Wexford”.

At the beginning of the 19th century, the sport was beginning to lose its popularity, simply because it had become a public nuisance and merchants were finding it more and more difficult to procure bulls. In and around this time, an active effort was made to rid market places in Ireland and the UK of “plebeian” sports such as Bull-baiting. In 1835, the sport was finally outlawed by the Cruelty to Animals Act of 1835. 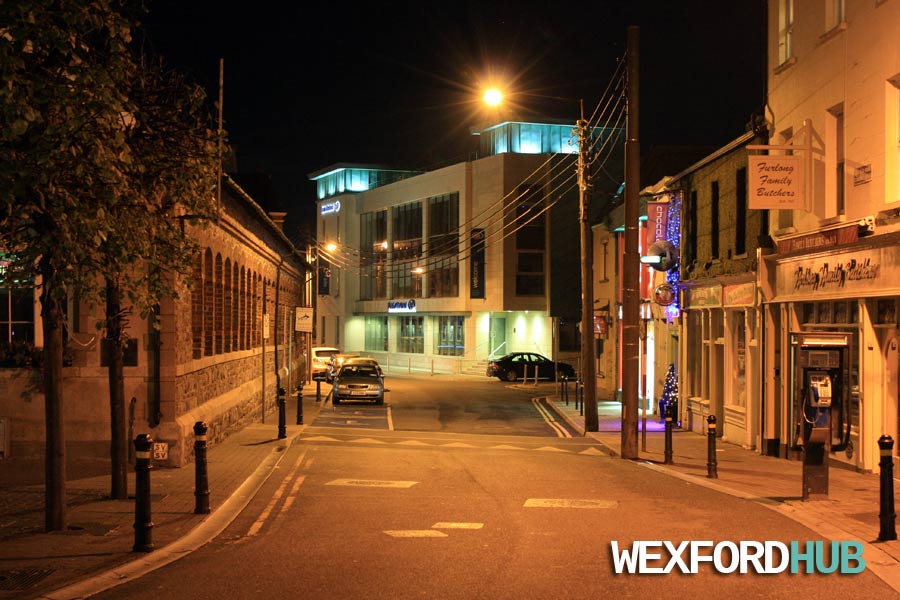 Pictured above: Looking down towards Common Quay Street, which leads onto the quay. Ahead, you can see the new Bank of Ireland building. On the right, lies the recently-closed premises of Furlong’s Family Butchers. The bright lights are emanating from Chocolate Bar, which was a pub that closed in 2015.

The Bullring became the scene of a massacre after Cromwell’s sacking of the town in 1662. After Cromwellian soldiers had breached the walls of the town, they proceeded to rampage through its streets, killing people and setting buildings alight. At Wexford’s Bullring, a large number of civilians had gathered together. Cromwell himself later recalled the massacre in his own words. According to Cromwell, his soldiers ‘put all to the sword that came in their way… not many less than 2,000’. 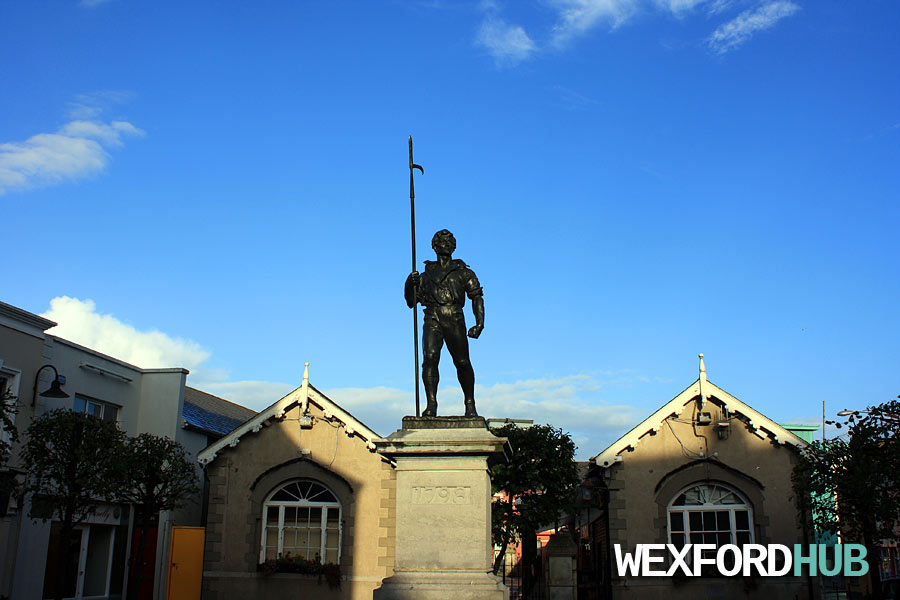 The Pikeman statue in The Bullring, which was sculpted by Irish nationalist Oliver Sheppard in 1905.

During the 1798 Rebellion, the Bullring became home to a pike-making factory, which was used by the insurgents to make and repair pikes. The pike was an extremely long spear that was popular amongst infantry soldiers. However, unlike other spears, it was not intended to be thrown.

The Bullring was once home to a courthouse. In his description of Wexford town in 1764, Amyas Griffiths described how the courthouse had ‘an excellent clock, etc., stands.’ This courthouse was used up until the construction of Wexford Courthouse on Wexford Quay in 1806.

In 1910, the murder of a woman called Mary Annes Wildes took place in the apartment above The Cape, which can be seen in the first photograph. The case received a significant amount of media attention at the time. Artist Simon Bloom, who was of Russian descent, served time for the murder and emigrated to America upon his release. At the time of the murder, “The Cape” was called “The Cape of Good Hope”. 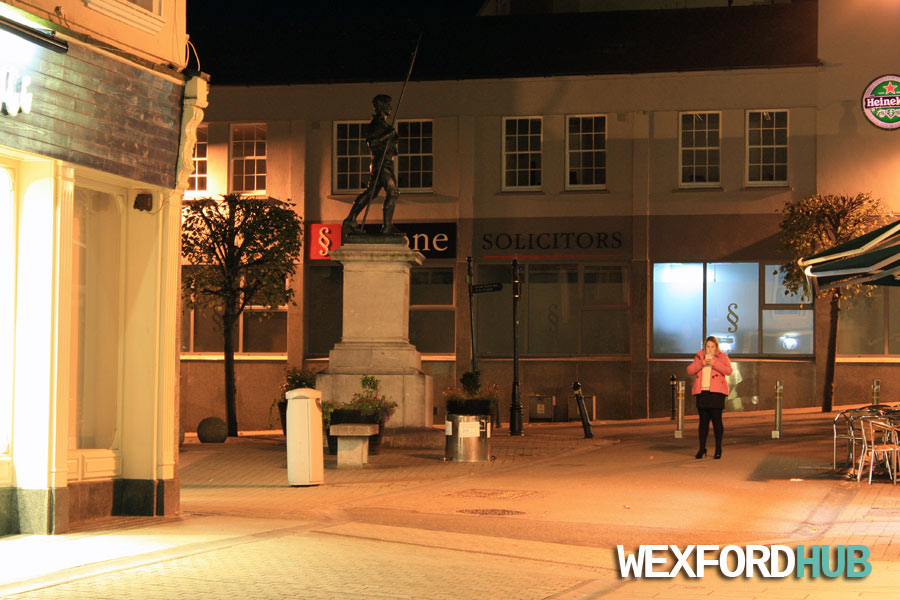 Above: The view of The Bullring from Wexford’s North Main Street. Stone Solicitors occupy the building behind The Pike Man. In the past, this building was home to Traynor’s Hardware and the National Irish Bank.

During the centenary commemorations of the 1798 Rebellion, a decision was made to erect a permanent memorial for the uprising. The design of a larger-than-life pike man, standing in a heroic pose, was accepted by the committee. The design was by Irish nationalist and sculptor Oliver Sheppard, who would later go on to design the bust of Willie Redmond in Redmond Park. During the unveiling of the statue in 1905, the town became awash with flags and banners. More than 10’000 people traveled to Wexford Town by train so that they could witness the spectacle.

In 1919, the first petrol pump in Wexford Town was installed in the area.

The Bullring is considered to be the beating heart of Wexford Town. For hundreds of years, the area has been home to a bustling market place, which was filled with fishmongers and butchers. In 2012, the market place at The Bullring was re-opened after a temporary closure. The refurbished log cabins inside the marketplace are occupied by traders selling things such as gifts, foodstuff, local crafts and antiques. All in all, the marketplace has changed very little since it was first built back in 1877 by Timothy O’ Connor. 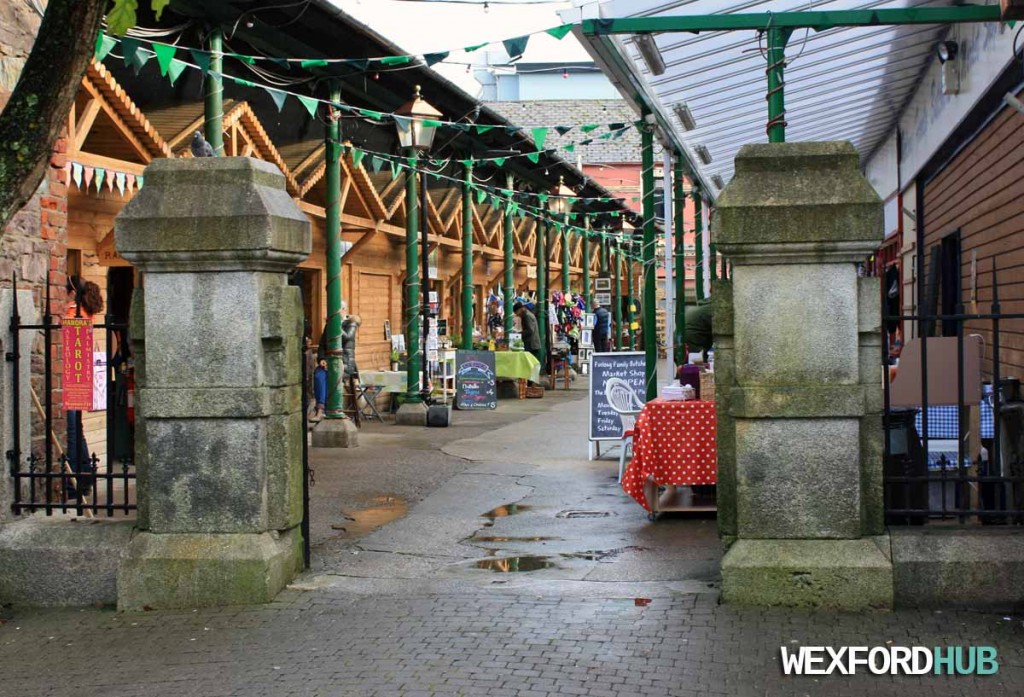 Above: The Bullring Market, which is open on Fridays and Saturdays between 9AM and 4PM.

Because of its central location, the Bullring is often used for a wide range of events and activities. These range from charity drives to protests and festivals such as Wexford Winterland. In the past, the Bullring has welcomed historical figures such as trade union leader James Larkin, Irish nationalist Eamonn de Valera and Irish Parliamentary Party leader Charles Stewart Parnell; all of whom used the square to hold rallies and deliver political speeches.

The Bullring also has ties to Oscar Wilde; a famous Irish writer that was renowned for his plays and his novel The Picture of Dorian Gray. His mother Jane Wilde (nee Elgee) is believed to have been born in a rectory that was situated in The Bullring. The rectory, which no longer exists, would have been situated in the north west corner, to the left of where the main entrance to The Bullring Market is located (close to a fashion boutique called Diana Donnelly).

An old video of The Bullring from 1902. The video is from the Mitchell and Kenyon Collection and it gives us an interesting insight into how life was at the time:

A Google Map showing the location of The Bullring, which is situated on Wexford’s North Main Street.