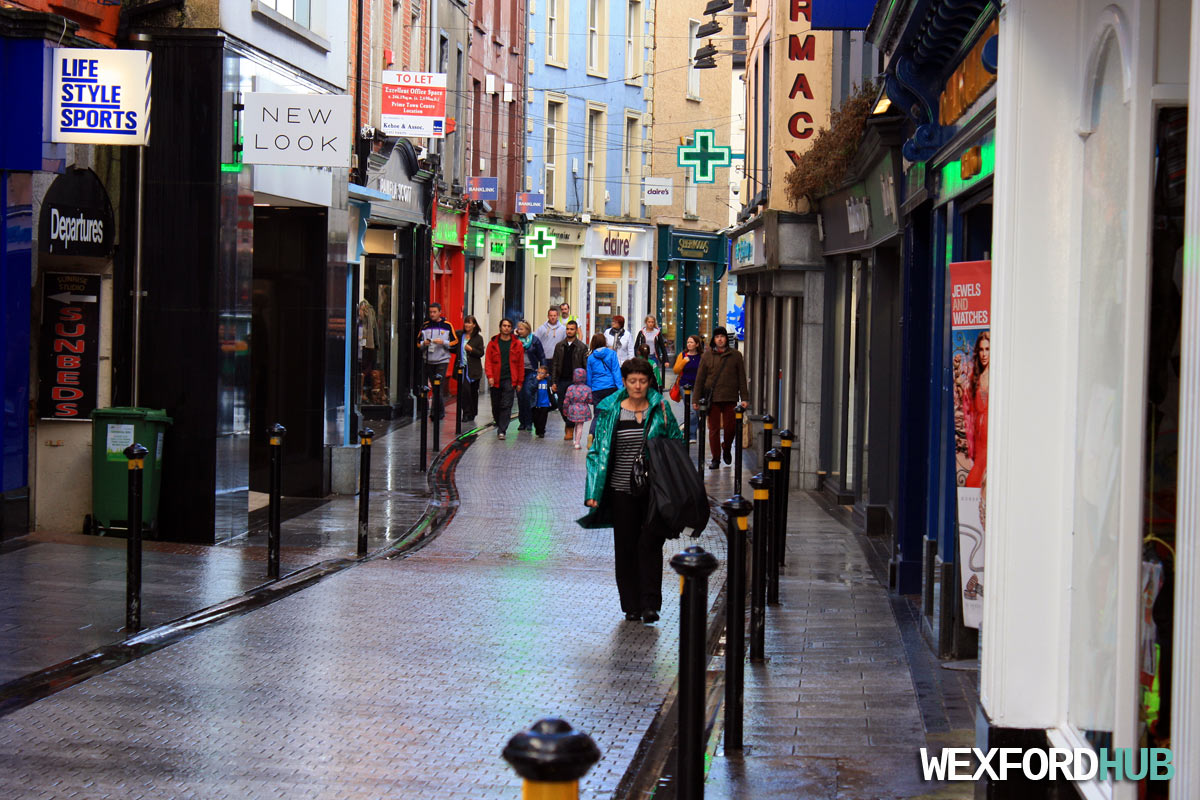 Pictured above: North Main Street in Wexford Town. This was taken outside of a cafe called Cappuccino’s, which is situated on the corner of Rowe Street. Visible are shops such as Lifestyle Sports, New Look, Pamela Scott, Claire’s and Hassett’s Pharmacy. On the left, between Lifestyle Sports and New Look, you can see the entrance to Fettit’s Lane (the word Departures is written over it), which is a pedestrian walkway that joins up with Anne Street and the Church Lane car park outside of the SuperValu supermarket.

In the past, this area was occupied by businesses such as Nangles and M&Js. M&Js was famous for its chip shop, which was situated at the front of the restaurant. Nangles was a restaurant and “hot bread shop” that was located where Westgate Design is today. It was popular for its delicious doughnuts and its confectionery cakes. On the side of Nangles, there was a sign that read “Have a nice day!” in languages such as French and German. 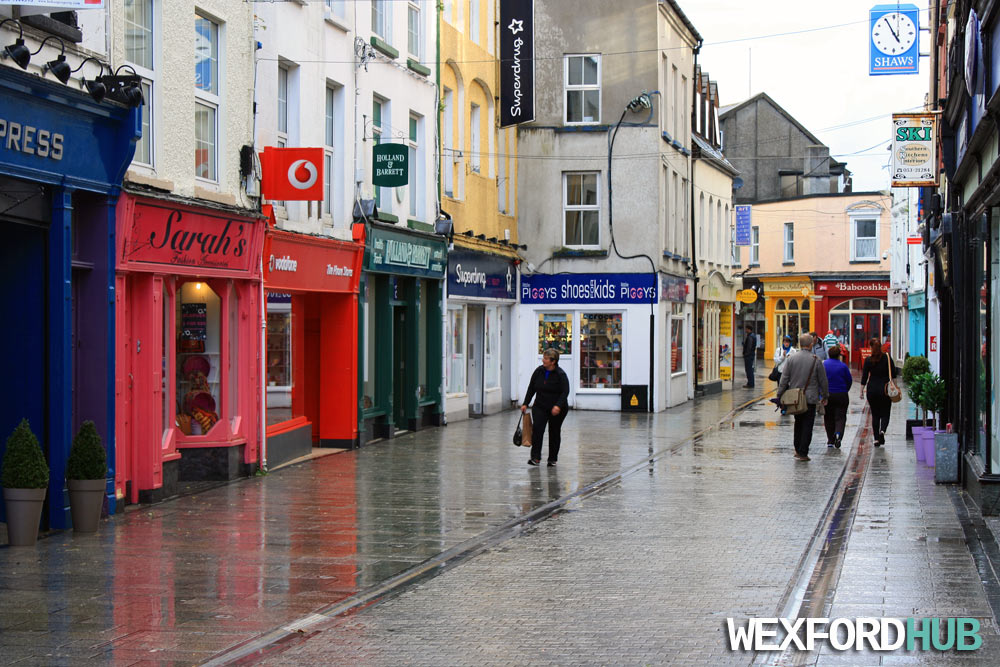 Pictured above: The section of North Main Street that connects The Bullring with Selskar Street. This was taken outside of Fat Face, which is a clothing store that is situated on the corner of The Bullring. Visible are shops such as Sarah’s Fashion Accessories, kids shoe shop Little Piggys, health food shop Holland & Barrett and Superdrug. On the right, you can see the clock for Shaws, which is a department store that contains outlets such as Top Shop and Dorothy Perkins. A few minutes before this photograph was taken, a short-but-heavy rain shower had passed overhead, leaving the streets filled with puddles of water. 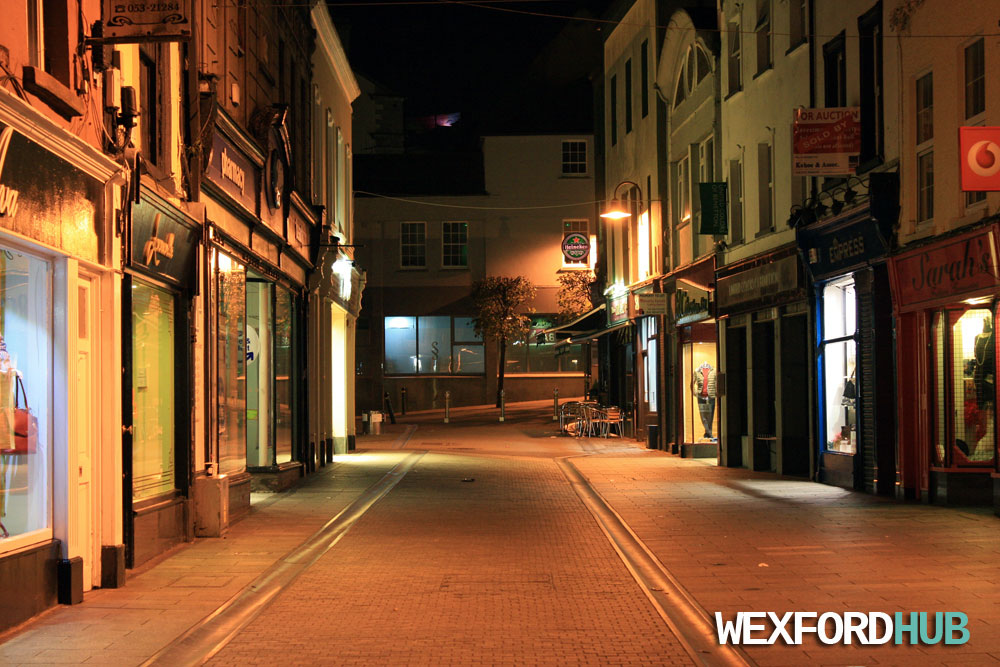 The picture above is looking up towards Wexford’s iconic Bullring. On the left, you can see Boots Pharmacy. This was where Greenacres was situated until it moved to Selskar Street in 2005. The building is unique in the sense that it has maintained its Flemish style design. Stone Solicitors is the building in the far distance. In the past, this was home to Traynors Hardware, which later moved to John Street. 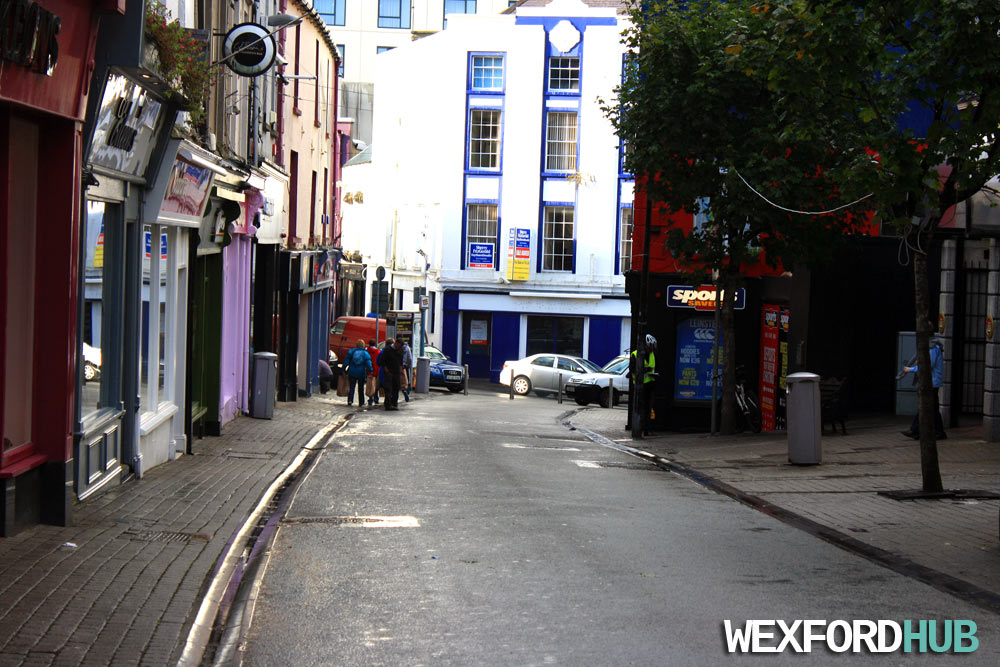 This picture was taken outside of the AIB bank. The unoccupied blue-painted building in the distance was home to Permanent TSB until it moved to a newly-built premises in Cornmarket. A sportswear outlet called Sports Savers is visible on the right. In the past, this premises was occupied by a long-established hardware store called Goggin Bros. 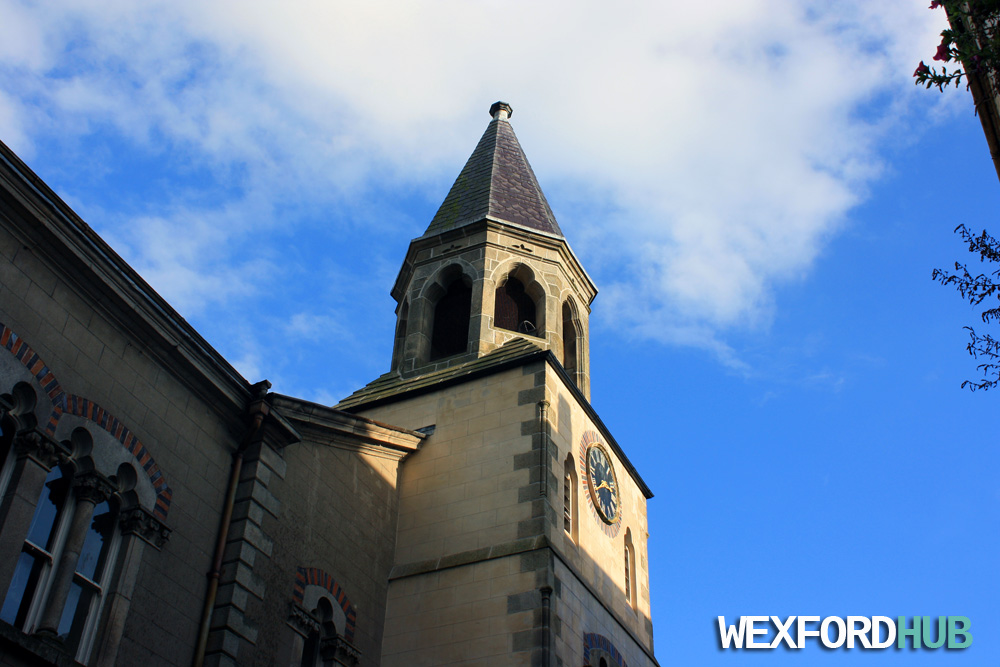 A photograph of St. Iberius Church, which is a place of worship for people in the Church of Ireland. It is believed that St. Ibar of Beggerin used the site that this church is built on as an oratory during 400AD. 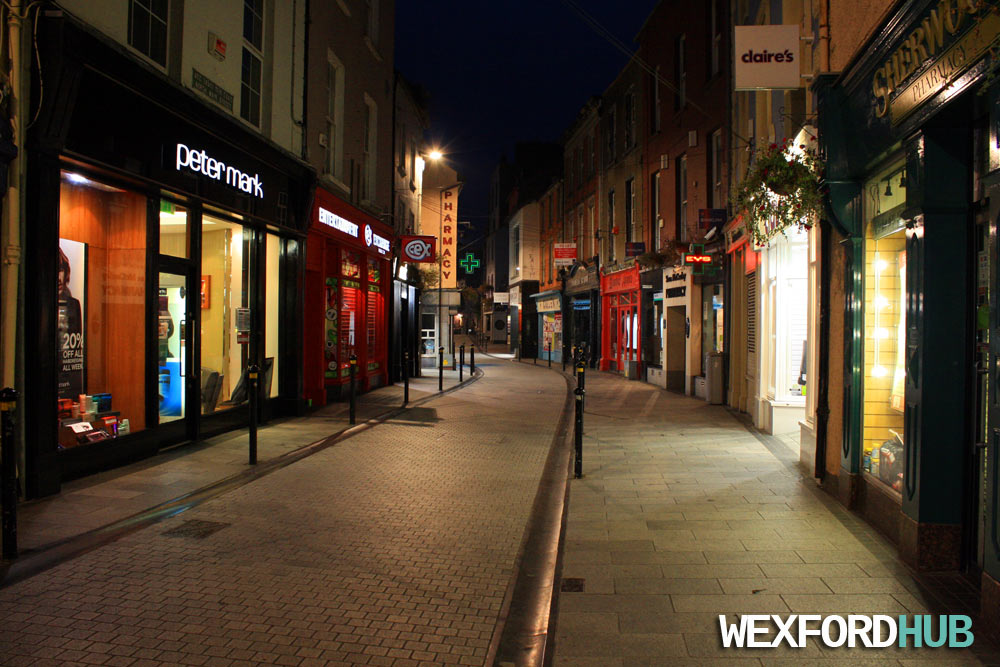 A picture of Wexford’s North Main Street at night time. This shot was taken in September of 2014. Visible are Peter Mark hairdressers, a buy and sell store called CEX and Sherwood’s Pharmacy. This was taken at the top of Anne Street, across from the new DV8 Fashion store that replaced AWear.

Another night time shot of Wexford’s town centre. To the left, you can see Westgate Design. On the right, you can see the closed shutters of Hynes Jewellers and €URO, which is a discount store. 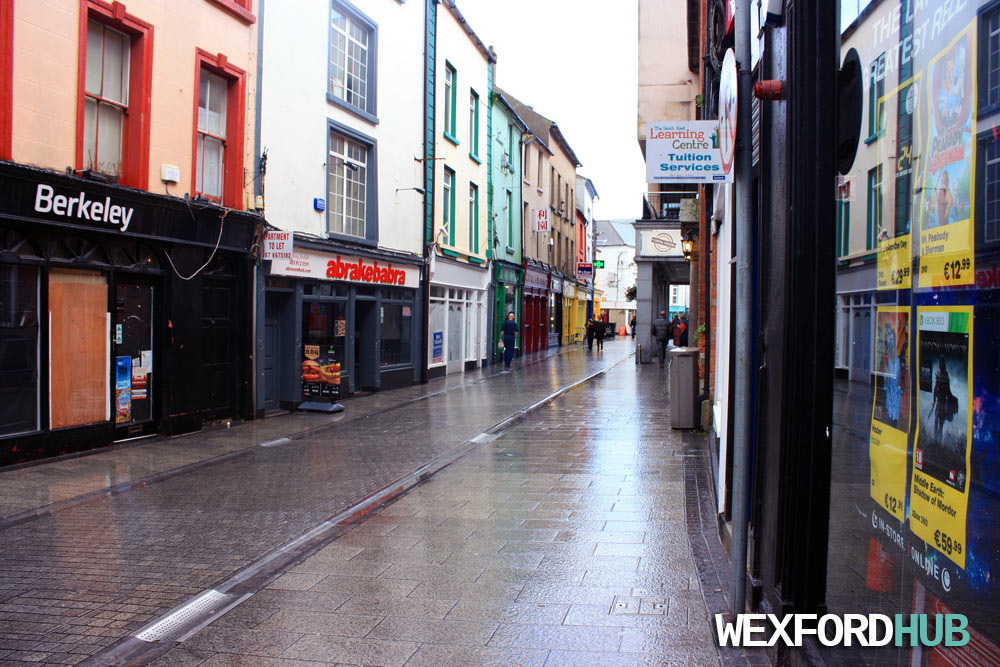 This photograph was taken outside of Xtra Vision on Selskar Street. On the left, you can see the recently-closed Berkeley, as well as fast food outlet Abrakebabra. Berkeley was later replaced by a shoe shop called Sweet Feet.