Wexford Bridge crosses the River Slaney, joining Wexford Town’s quay front with Ferrybank. It is 383 meters in length and it was constructed in 1997 after the previous bridge started to show signs of corrosion. The current bridge is actually the third version to be built. Previous versions of the bridge include:

Between 1866 and the 1950s, a bridge also existed between Carcur and Crosstown. This particular bridge had to be demolished in 1959 because of its inability to deal with a continuous rise in the level of traffic. On an old Ordnance Survey map from the 1800s, you can see that this bridge was labelled “New Bridge” and that it connected “New Road” (later renamed to Redmond Road) with Crosstown. This map also notes the existence of a draw-bridge in the middle. Nowadays, the remnants of “New Bridge” can be seen at the entrance to the Wexford Boat Club. 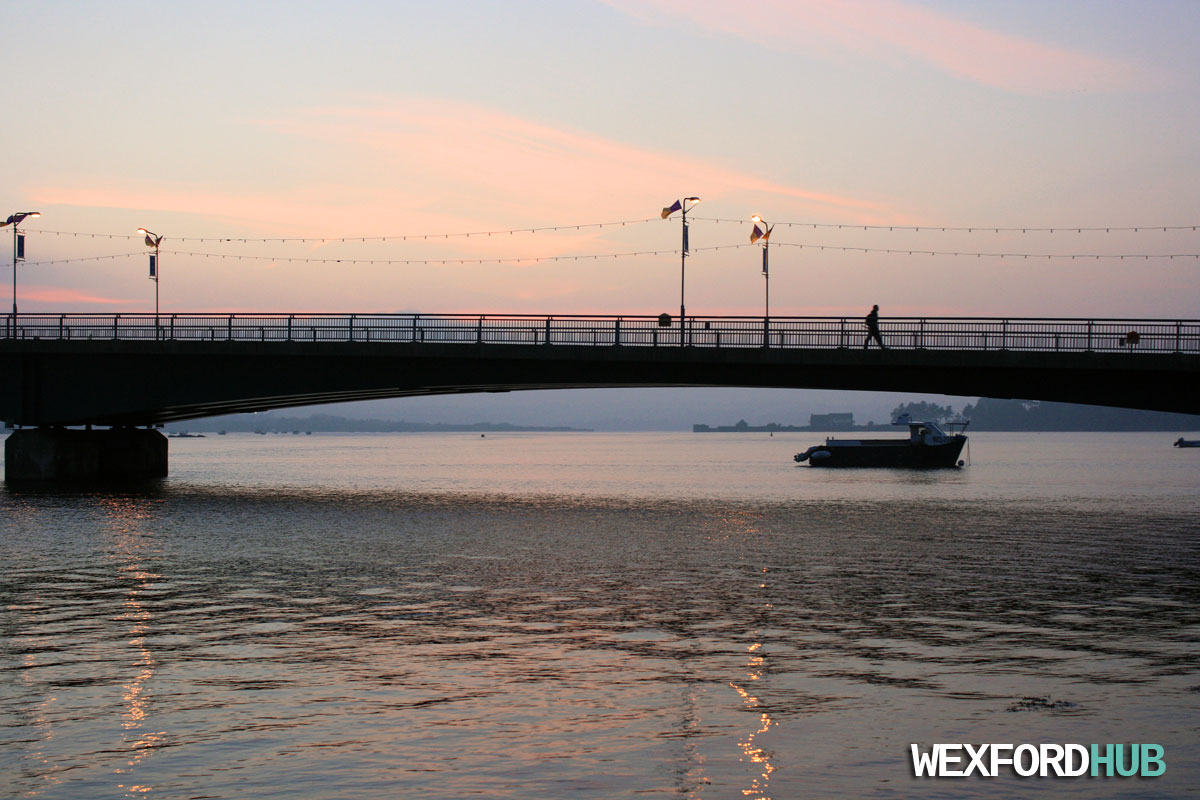 This photograph of Wexford Bridge was taken in September of 2014.

The wooden 1795-1866 bridge was built by an American called Lemuel Cox, who was an engineer from Boston. It was 474 meters long and it was made out of American oak. The bridge gained notoriety in the late 1700s when it was used as the execution spot for those who were involved in the 1798 Rebellion. Those executed on Wexford Bridge included Cornelius Grogan of Johnstown Castle, Bagenal Harvey and John Henry Colclough. Ironically enough, both Cornelius Grogan and John Henry Colclough were among those who had invested money into the construction of the bridge. Records from the time show that Grogan contributed £1,000 and that John Henry Colclough contributed £500. After his execution, John Henry Colclough’s headless body was taken from the bridge and buried in the grounds of St. Patrick’s Church, which is situated at the end of High Street.

During the 1798 Rebellion, a large number of loyalist soldiers were put on trial in Wexford Town. After being found guilty, they were marched to Wexford Bridge, where they were piked to death and thrown into the River Slaney. This massacre occurred while the vast majority of the United Irish leadership was out of town (most of them were busy with battles and skirmishes that were occurring elsewhere). These executions were short-sighted and rash, as the loyalist prisoners could have been used as a bargaining chip. Their deaths ensured that the United Irishmen would receive little mercy in the event of a defeat. 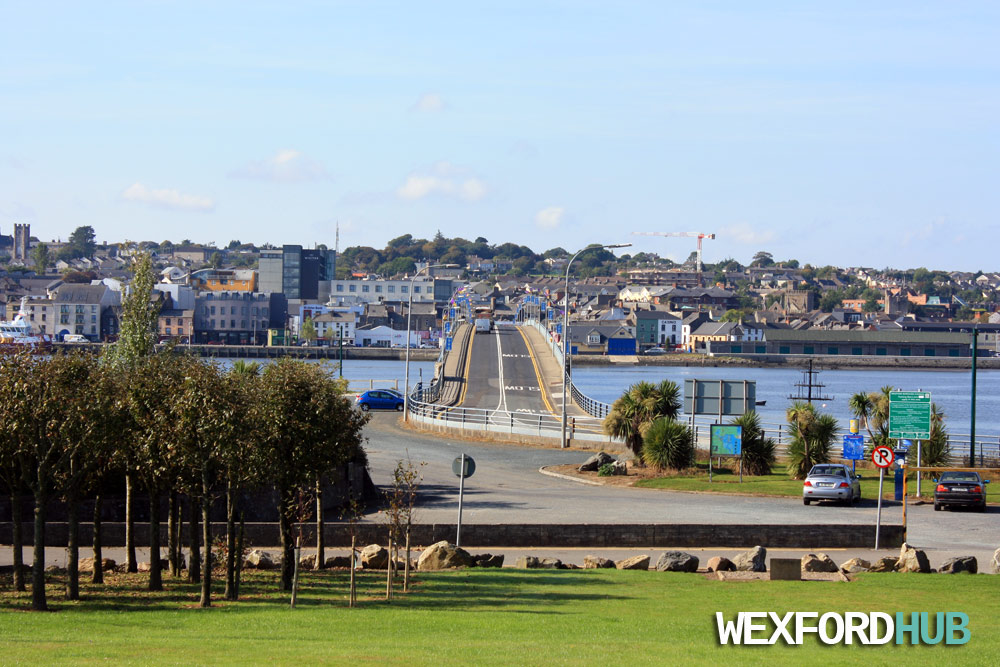 A picture of the bridge, as seen from Ferrybank.

In 1827, a section of the bridge collapsed. This was quickly repaired at the cost of about £6,200. Up until 1851, the bridge operated as a toll bridge and farmers bringing corn to the town were forced to pay a fee. It was this toll fee that ultimately led to the creation of an alternative corn market at Castlebridge, which performed exceedingly well. So well, in fact, that it threatened the viability of the corn market in Wexford Town! 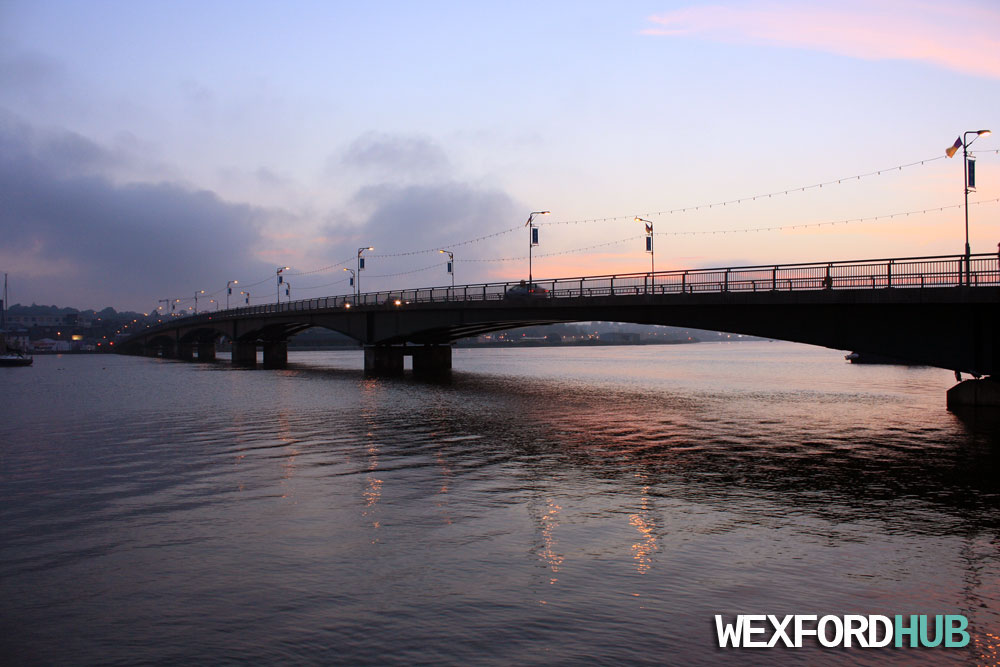 The bridge, just as the sun was beginning to set.

From 1866 onward, a bridge connected Redmond Road / Carcur with the Crosstown area of Wexford. During this period, a ferry crossing existed between Ferrybank and Wexford Quay (there was a pier located on each side of the River Slaney). This ferry crossing would have taken the same route that the current-day bridge crosses today.

In 1922, during the Irish Civil War, The Irish Times reported that a section of “New Bridge” between Carcur and Crosstown had been ‘blown up’ by “irregulars”. The bombing caused £1,400 worth of damage. Later, when the bridge was being repaired, the men involved in the repair works were shot at, threatened and told to leave the area by anti-treaty forces.

The entrance to the old Wexford bridge. Situated at the entrance of the Wexford Boat Club.

By 1932, it had become clear that “New Bridge” was in an ‘unsound condition’. As a result, signs were erected informing motorists that they needed to restrict their speed while crossing the bridge. At the time, it was estimated that £5,000 would be required for its reconstruction.

In 1938, the national press reported that the bridge was in a dangerous condition and that it had been closed to vehicles that were over two tons in weight. The bridge was considered to be incapable of carrying modern traffic, as the tie bars were too light to support the beams. Furthermore, it was recommended that crossing vehicles maintain a ‘walking pace’ and that the bridge be inspected on a daily basis. In response, Labour Party politician Brendan Corish T.D. proposed that a new bridge be built between Ferrybank and the courthouse at Wexford Quay. 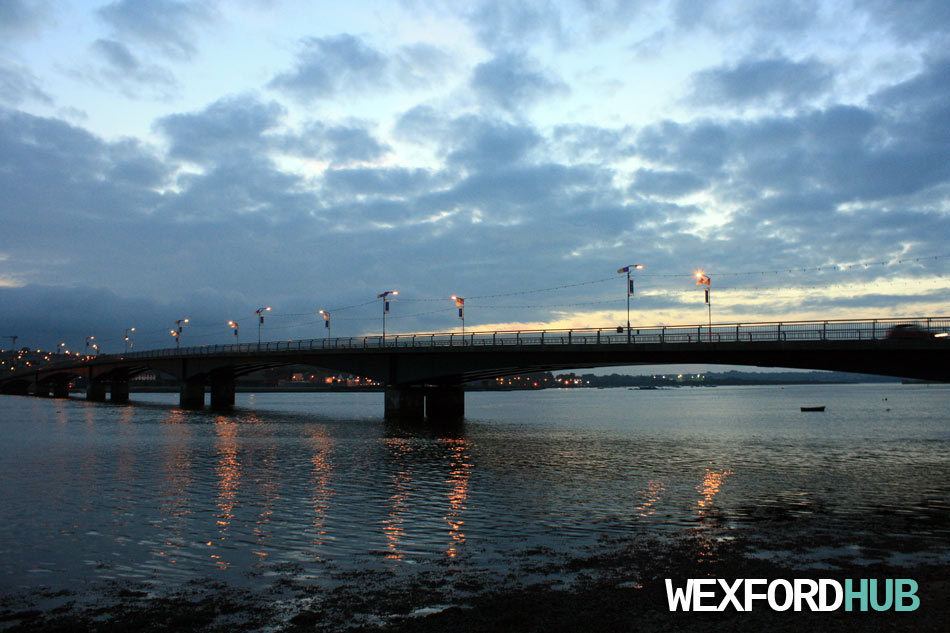 The current version of Wexford Bridge was built over a 10-week period. It was officially reopened on Saturday, the 22nd of November, 1997.

During the 1950s, a newer bridge was constructed in the same area as the original 1795-1866 bridge. Its construction was seen as a sign that Wexford’s fortunes were beginning to change for the better.

In 1997, the bridge was re-built after engineers noticed signs of corrosion on the reinforcement and prestressing anchors. The 1997 bridge was designed by Barry & Partners and it consisted of a composite concrete slab and a deck that was made up of steel girders. The reconstruction of the bridge, undertaken by Ascon Ltd, took ten weeks to complete. 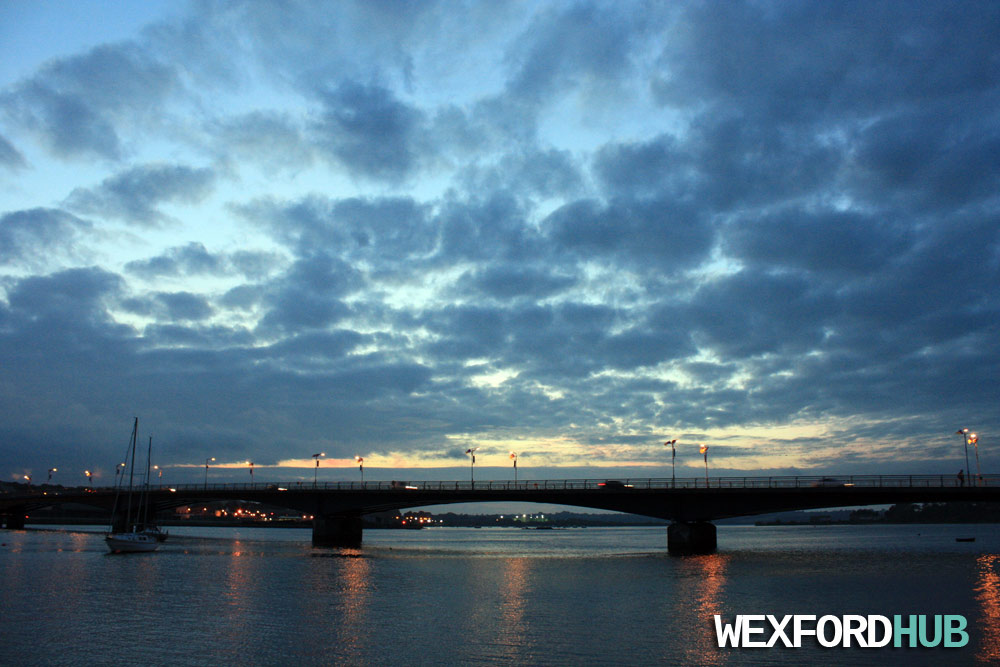 An interesting sky above the bridge at dusk.