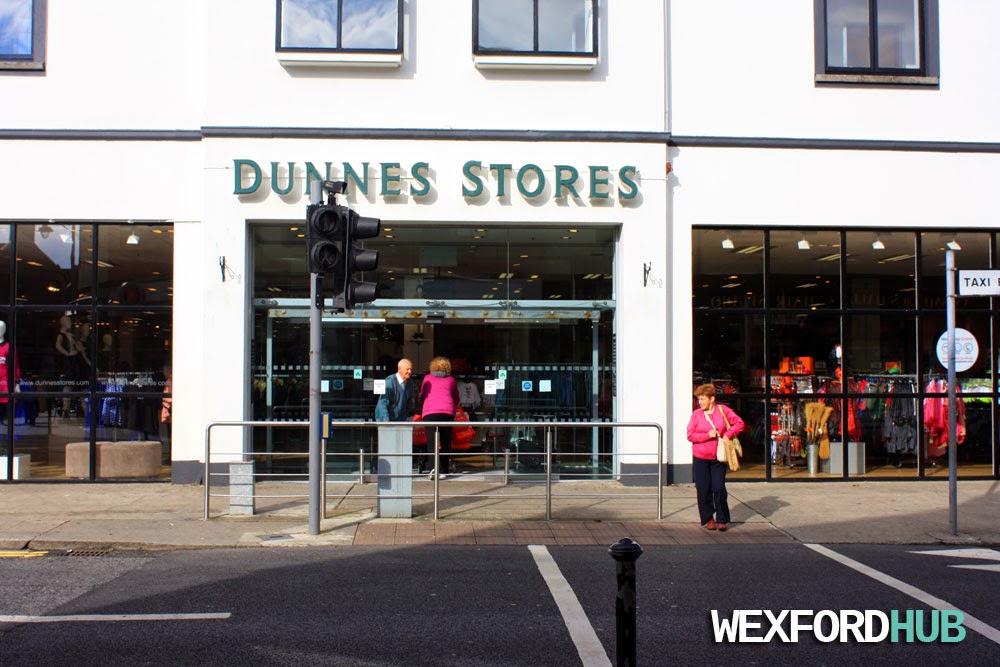 A photograph of the Dunnes Stores entrance in Redmond Square.

Dunnes Stores is an Irish supermarket chain that sells groceries, deli food, clothes and household items. Its Wexford supermarket was opened in Redmond Square in 1991. Before that, it had operated from a smaller retail unit on South Main Street.

Although the store is open on most days – it does tend to close its doors on Christmas Day, St. Stephen’s Day, New Year’s Day, Easter Sunday and Easter Monday. Note that opening hours are subject to change and that you should call the store if you are unsure.

The supermarket is adjoined by a large Pay and Display car park, which is situated on Redmond Road. Because of the one-way system that is in place, you will need to approach the area from 1798 Street if you intend on using this car park. You will also be pleased to learn that there is a taxi rank outside of the store.

The supermarket is situated across from Wexford’s Train Station, which makes it a handy destination if you plan on picking up a sandwich or some hot deli food before you depart.

On the 9th of November, 2008, the company closed its store on South Main Street. The store in question had been in operation for roughly 60 years. Since then, the unit has been left in a vacant state, much to the annoyance of local traders and councillors, who believe that its appearance on Wexford’s main street is an eye sore. During a Wexford Borough Council meeting in 2014, Mayor George Lawlor said that he did not believe that the company was making an effort to secure a new tenant for the premises. Cllr. Danny Forde was in agreeance with the mayor. During the meeting, Cllr. Forde claimed that Dunnes Stores was not going to allow any potential competitors to occupy the unit.

In 2009, it was announced that Dunnes Stores intended to expand its store in Redmond Square. The expansion plans included a new two-storey extension, as well as the creation of a three-storey car park. To facilitate this expansion, the retail chain purchased the old Wexford Glass premises at the end of Kaat’s Lane in Westgate. Although the Wexford Borough Council granted permission for this expansion, local businessman Michael Tierney lodged an objection with An Bord Pleanála, stating that the new redevelopment would cause him ‘severe financial loss’. The new expansion would have adjoined the old red-brick houses at Auburn Terrace, which Tierney planned on converting into a hotel once the recession had subsided. According to Tierney, the size of the redevelopment would affect the amenity of the three houses in Auburn Terrace, which were listed as protected structures.

In 2010, An Bord Pleanála sided with Tierney’s objection and refused planning permission to Dunnes Stores. In response to the decision, Fianna Fail Cllr. Fergie Kehoe called it a ‘slap in the face for urban renewal.’ In 2013, it was reported that Tierney intended on selling his B&B at 3 Auburn Terrace and that his plans of converting the property into a boutique hotel had fallen by the wayside.

A map showing the location of Dunnes Stores supermarket in Wexford Town: