Wexford Gaol was built in 1812. After the Irish War of Independence in 1921, it was taken over by the Free State government and utilised as a military barracks.

In 1923, three anti-treaty IRA prisoners were executed outside of the jail house. The prisoners; James Parle, John Creane and Patrick Hogan, had all been arrested for possession of firearms. A commemorative plaque in the Republican Garden of Remembrance shows the exact spot where the three men were lined up and executed by a firing squad. 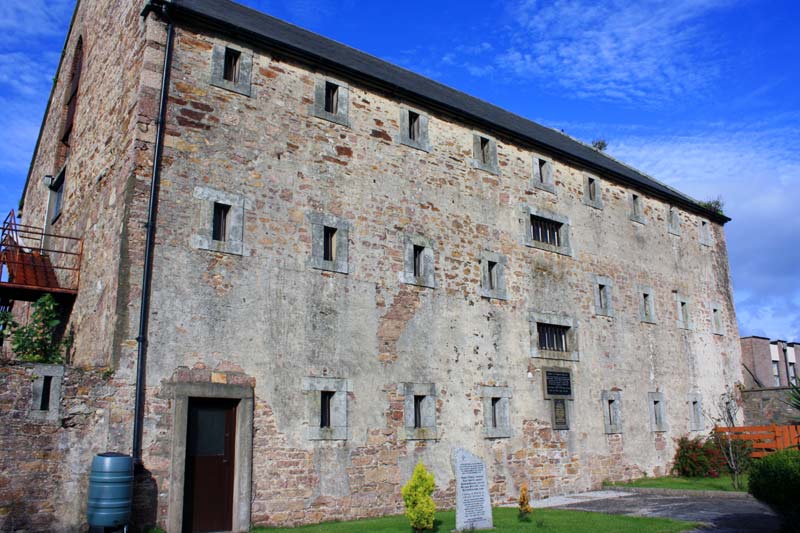 The building above served as the women’s prison.

The building ceased to function as a prison in 1903, after which it was converted into a home for female inebriates, which was run by the Sisters of St. John of God (this home was called St. Brigid’s Centre). After its conversion into a home for female drunkards, the walls around the gaol were reduced in height.

The last execution to take place at Wexford Prison was in 1892, when Wicklow man Daniel Handley was hanged for the murder of Mary Anne Lyons. The choice of location for his execution was met with a wave of protests, which included slogans such as “You can’t hang Wicklow men in Wexford!” His execution, which was held at 7.30AM on Tuesday, the 19th of April, led to the gathering of a large crowd outside of the grounds of the prison. According to reports from the time, Handley shook so much in the lead-up to his execution that he had to be physically restrained by the prison guards.

The gaol had roughly 60 prison cells and it was enclosed inside walls that were over 20 feet high. The grounds of the prison contained 16 excercising yards. In front of the jail, there was a square, which was used for public executions up until the 1860s. In the 1840s, two hospital rooms, a kitchen and a chapel room were added to the interior.

Although executions were held at the prison, it is important to note that most inmates were imprisoned because of petty crimes such as stealing, public indecency and vagrancy.

One example from the Irish prison records tells the tale of a woman called Mary Sloane, who seems to have had multiple stays in Wexford’s gaol. The Dublin native, who was living in Gorey during the 1880s, was imprisoned for crimes such as drunkenness, disorderly conduct and larceny (the unlawful taking of the personal property of another person). Some of the other examples include:

One famous example would be imprisonment of two men from Bunclody, on account of their failure to pay tithes to the Anglican Church. It was their imprisonment in Wexford that eventually led to the events of the “First Rebellion”.

Later on, the grounds were converted into offices for the both Wexford County Council and the Wexford District Court. Nowadays, it houses the Wexford Campus School of Art Design, as well as the Wexford Chamber of Commerce.

The front of the grounds can be seen from Spawell Road, whereas the main entrance can be found on Hill Street: