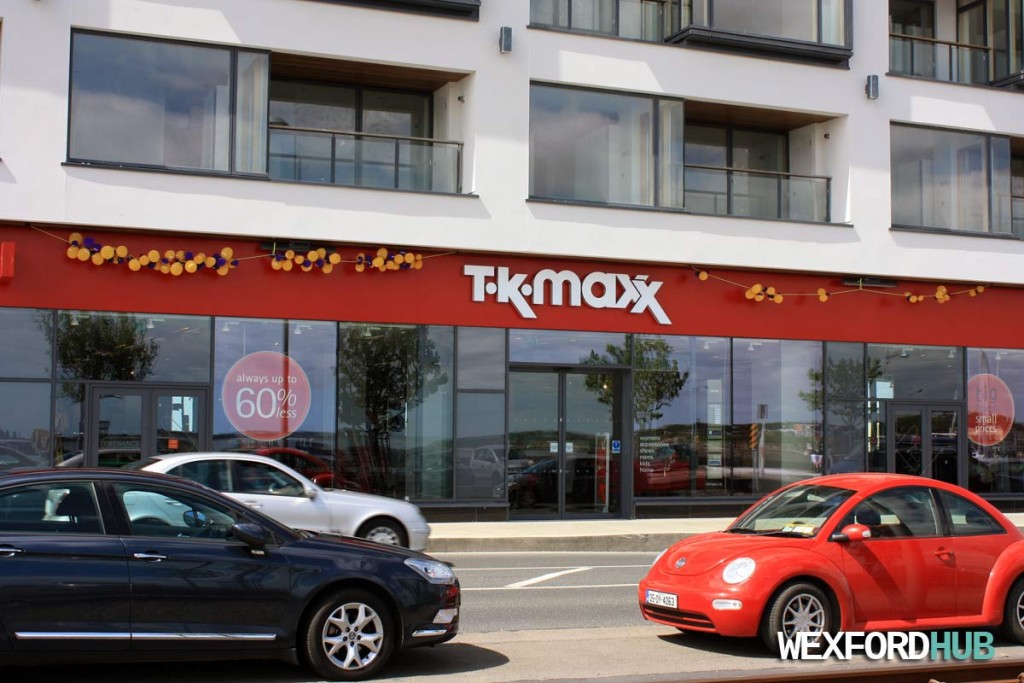 A photograph of the T.K. Maxx outlet on Wexford’s Paul Quay.

T.K. Maxx is a popular American department store chain that sells popular clothing brands at knockdown prices. In the United States, the company operates under the name T.J.Maxx.

The proposed opening of T.K. Maxx was met with positivity and excitement, as many people felt that a large retailer could inject some life into the southern end of Wexford’s main street. It was also revealed that the store was expected to create 40 new jobs for the town.

Since the onset of the recession, South Main Street had suffered economically. Supermarket giant Tesco moved to Distillery Road in 2007 and the Irish economic downturn began to impact small businesses from 2008 onward. These tough economic conditions led to the closure of Lowney’s Mall, as well as the closure of a number of small traders in the area. Many retailers in the area were hopeful that the draw of T.K. Maxx would lead to an increase in shoppers in the area.

In March of 2014, local newspapers reported that T.K. Maxx was planning to move into a 2,505 square meter retail unit in the Stonebridge development on Paul Quay. The retailer had submitted their planning application to the Borough Council and it was expected that the store would open in July of 2014.

In the summer of 2014, the opening of T.K. Maxx was cast into doubt when local Bullring-based businessman Nigel Hamilton objected against the store’s opening on Paul Quay. Hamilton, who owns the shop “W.R Hamilton & Son”, claimed that its location in the Stonebridge development on Paul Quay would take business away from Wexford’s main street. Hamilton argued that the popular retailer should take up residency on the main street, where the increased footfall would benefit other shops.

In September of 2014, it was announced that Hamilton’s objection had been rejected by An Bord Pleanála, as the body did not believe that T.K. Maxx’s location would negatively impact the vibrancy of the town centre.

In October of 2014, it was reported that the retailer had agreed rental terms for its usage of the Stonebridge retail unit, which had been lying in a vacant state since its construction at the tail-end of the Celtic Tiger.

In March of 2015, the store began its recruitment drive for staff members; resulting in dozens of job applications.

On Thursday, the 11th of June, 2015, T.K. Maxx opened its doors on Paul Quay. Shoppers that attended the opening dressed in swimwear were awarded a €50 T.K. Maxx voucher. The store was officially opened by Wexford GAA player Lee Chin and fashion expert Cathy O’Connor.

The store receives daily deliveries of famous clothing brands; with up to 10,000 items being delivered over the course of the week.

A map showing the location of T.K. Maxx in Wexford: