On Friday, the 1st of May, 1169, a force of Norman soldiers landed in Bannow, County Wexford. Led by Robert FitzStephen, they quickly merged with another group of Normans before embarking on Wexford Town. There, they laid siege to the town until two bishops managed to persuade the townspeople to surrender.

Once FitzStephen was in full control of Wexford Town, he immediately set out to fortify the town and its surrounding areas by building a ringwork castle at Ferrycarrig. This castle, which is thought to be the first Norman fortification in Ireland, was created in order to keep watch over the River Slaney.

Unfortunately, the castle that was built in 1169 no longer exists. Because a 15th century Norman tower house exists on the opposite side of the river, a lot of people tend to confuse the two fortifications. In many cases, when people speak of “Ferrycarrig Castle”, they are often (erroneously) referring to the rectangular tower house that can be seen on the north side of the river. 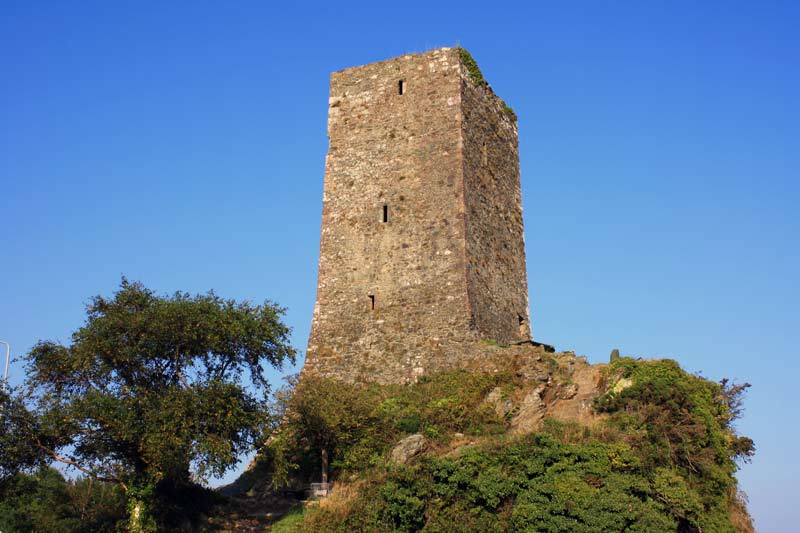 This is because many people are unaware of the fact that the ruins of the original 1169 castle lie beneath the round tower on the south bank of the river; inside the grounds of the Irish National Heritage Park. The round tower, which was modelled after earlier Christian structures, was actually built in 1858 as a memorial for those who had died in the Crimean War (1853-1856). Because of its distinctive medieval design, a lot of tourists make the assumption that it is much older than what it is.

In the mid-1980s, a series of excavations were carried out at the site of the old ringwork castle. During the excavations, they discovered that the defensive ditch around the castle had been cut out of rock and that it was 7 metres wide and 2 metres deep. A number of items were also discovered by archaeologists. These included silver pennies from the 1200s, animal bones, pottery from France and England, a battle axe and horse shoes. 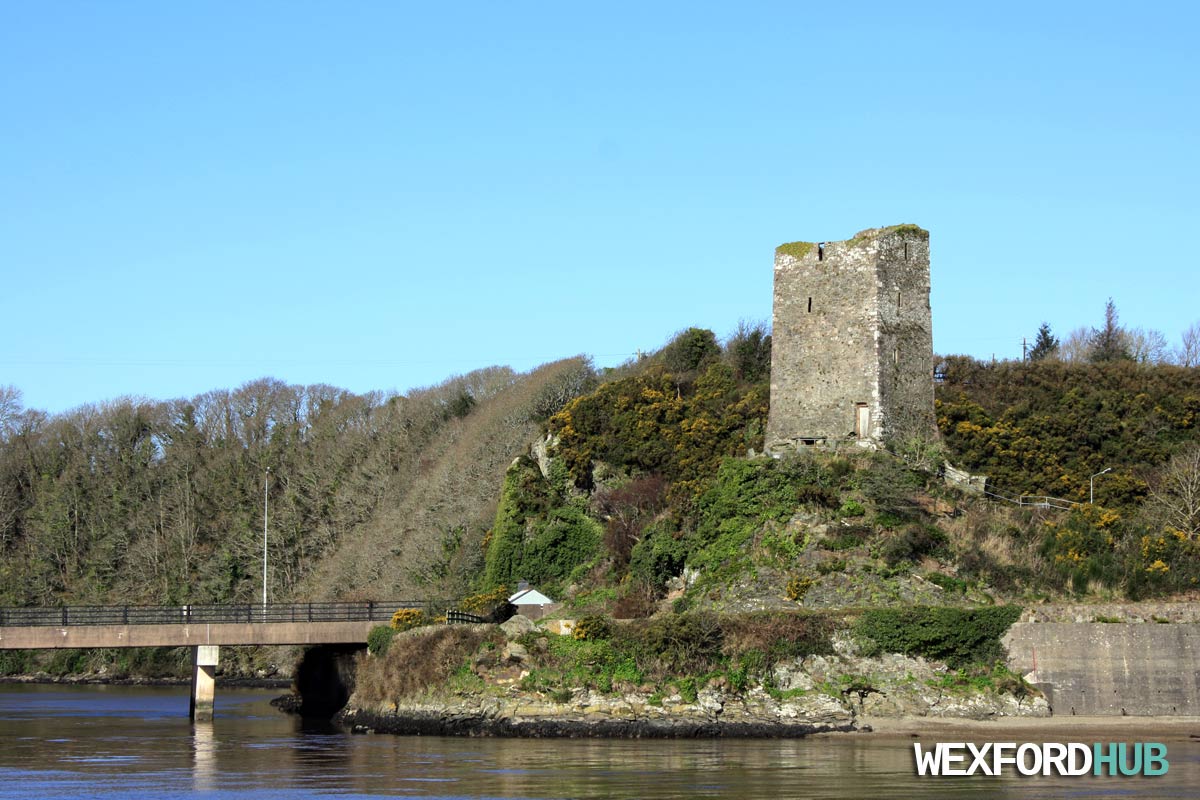 The tower house that can be seen today (shown in the picture above) was built in the 1400s by the Roche family, whose descendants had arrived in County Wexford during the initial Norman invasion of 1169. The structure, which is situated beside Ferrycarrig Hotel, was built to protect ferries and other boats from roaming rebels and opportunistic bandits. At the time, the ferry that crossed the River Slaney was extremely important to the locals, as a bridge did not exist in the area until 1795. Thus, they had to rely on a ferry to transport themselves and their cattle. Throughout the 1400s and the 1500s, this three-storey tower provided much-needed protection to the trade and traffic that was flowing between Enniscorthy and Wexford Town.

The tower at Ferrycarrig is unique in the sense that it was one of the few tower houses in Ireland that was built for a military purpose. More often than not, these kind of fortifications were erected by wealthy landowners as a means to defend themselves against raiders. The one at Ferrycarrig came equipped with gun loops / arrowslits, which were narrow slits that provided the defenders with the means to fire at any outside forces. It also had a murder hole above its doorway, which would have allowed its defenders to pour scalding water on anyone that had managed to breach the front door of the house. 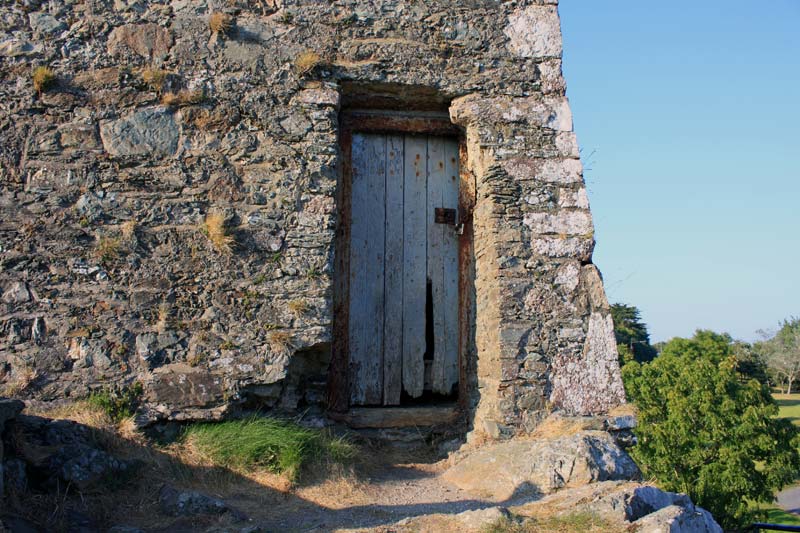 The front door, which has been locked because of safety concerns.

Unfortunately, these kind of structures started to become obsolete at the tail-end of the 1500s, as artillery became more widespread. It was at this time that forts like Duncannon Fort became popular, simply because they were better-suited for withstanding cannon bombardment.

The site itself has a small car park, picnic benches and a wonderful view of the River Slaney. Although you can climb up to the front door of the house (this is locked, as shown in the picture above), you should be aware of the fact that the steps are steep and that caution should be exercised at all times. 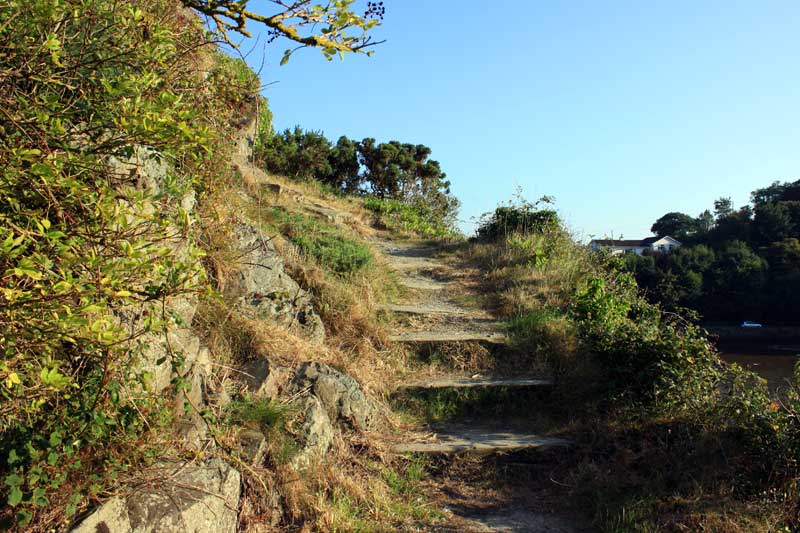 Steep steps lead up to the tower house in Ferrycarrig.

The entrance to the car park can be found on the N11, between Wexford Town and Enniscorthy. Below is a map showing the location of its entrance, which is just before the bridge (heading southbound):