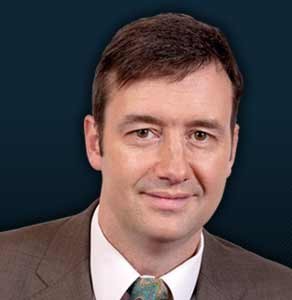 Michael W. D’Arcy is a Fine Gael politician and dairy farmer that is based in Gorey in County Wexford. He is the son of the former Irish Fine Gael TD Michael D’Arcy, who retired from politics in 2009.

D’Arcy received his education in Ballythomas National School, Gorey Christian Brothers and the University of London. In 1992, he won an All-Ireland junior football title with County Wexford after the team defeated County Cork 1-09 to 0-11.

D’Arcy entered the political sphere back in June of 2004 when he contested the Local Elections for the Electoral Area of Gorey in County Wexford. D’Arcy took the first seat on Count 6, having secured 1,952 first preference votes.

Between 2004 and 2007, D’Arcy served as the Chairman of County Wexford Vocational Education Committee.

During the General Election in May of 2007, he took the fifth and final seat in the Wexford constituency after defeating Fianna Fail candidate Lisa McDonald on Count 7. During the election, D’Arcy received a 11.2% share of the first preference votes. During his term in the 30th Dail, Michael served as the Deputy Spokesperson on Justice, with Special Responsibility for Equality.

In the 2011 General Election, the Gorey native narrowly missed out on retaining his seat after he was eliminated on the final count – losing out to party colleagues Paul Kehoe and Liam Twomey. He received 11.1% of the first preference votes during this election – a small 0.1% drop from his previous outing. His loss was seen as a shock at the time, as his party were doing extremely well in the polls and he was the only candidate from the north of County Wexford to contest the election. A post-election analysis concluded that Mick Wallace’s decision to enter the race had hurt D’Arcy’s chances.

Following the loss of his seat in 2011, D’Arcy was elected to the Administrative Panel of Seanad Éireann, which is the upper house of the Oireachtas. During this term, D’Arcy served as the Fine Gael Seanad spokesperson on Finance.

In February of 2016, Michael D’Arcy reclaimed his seat in the Dail after he was elected into the fourth seat during the 2016 General Election in Wexford, having received 7,798 first preference votes (10.9%).