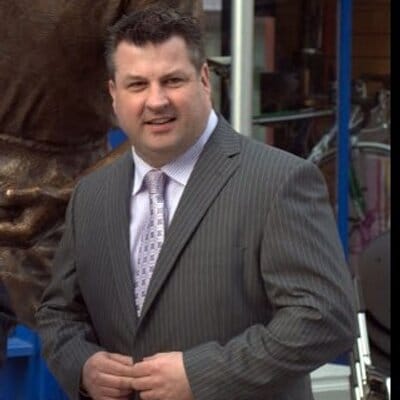 George Lawlor is a Labour politician from Wexford town. Since 2004, he has served as a councillor on both the Wexford Borough Council and the Wexford County Council. During his time in local politics, Lawlor has been elected as the Mayor of Wexford and the Deputy Mayor of Wexford.

Outside of politics, Lawlor plies his trade as the director of a print company called Impression Print. He is a member of both the Wexford Light Opera Society and the Sarsfield gaelic football club.

During the local elections in 2004, Lawlor became the youngest member of the Wexford Borough Council when he was elected into seat 7/12 after Count 11. During the election, he received 448 (6.44%) first preference votes.

On the 25th of June, 2007, Cllr. Lawlor was elected as the Mayor of Wexford Borough Council – a title that his late grandfather Eddie Hall held during the 1950s. His Labour colleague Joe Ryan was elected as Deputy Mayor.

In June of 2010, George was elected as the Deputy Mayor of Wexford.

In 2013, he was once again elected as the Mayor of Wexford.

Between 2011 and 2014, Labour’s support plummeted, as it was a part of a Fine Gael-led coalition government that had implemented a number of unpopular austerity policies. Despite his party’s low poll numbers, Lawlor managed to retain his seat on the Wexford County Council – being elected after the first count with 1,582 (9.9%) first preference votes.

In 2014, town councils such as the Wexford Borough Council were abolished by the Local Government Reform Act 2014. As a result, Lawlor was the last person to hold the position of Mayor of Wexford Borough Council. In June of 2014, Lawlor was elected as the mayor of the new Wexford borough district – a position that he held until June of 2015, when Independent candidate Ger Carthy took over.