A list of rent-related statistics for County Wexford. All of the statistics on this page were gathered from the Central Statistics Office and the Private Residential Tenancies Board.

Average monthly rent prices for the year 2014; broken down by location and ordered from highest to lowest:

As you can see, properties in New Ross had the cheapest average rent in 2014; being almost €55 cheaper per month than Rosslare.

A graph that shows the average rent prices in County Wexford from 2008 to 2014: 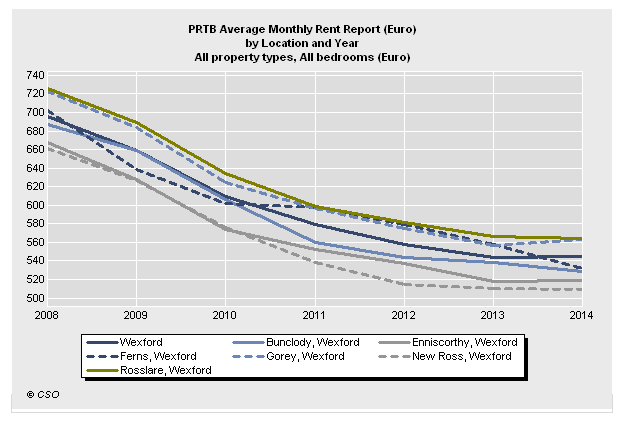 As you can see, the average monthly rent cost continued to tumble from 2008 onward, as Ireland went into recession and unemployment levels rose significantly. In Wexford Town, rent prices fell by roughly €152 from 2008 to 2014.

It is interesting to note that average rent prices in Ferns continued to fall throughout 2013. This is in contrast to other towns in County Wexford, all of which seemed to level-off. 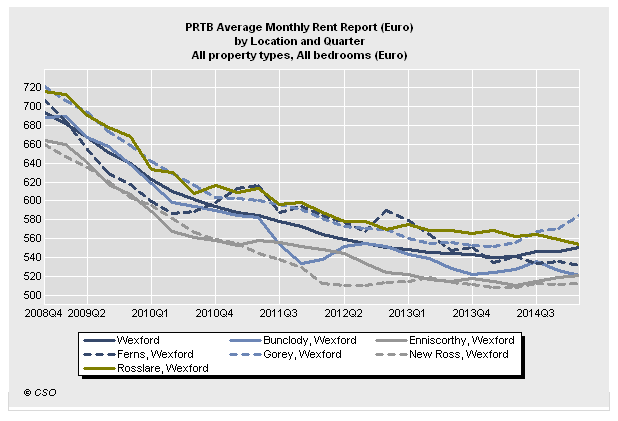 The following statistics are for 2014. In 2014, the average cost of renting a two-bedroom property was:

In 2014, the average monthly cost of renting a three-bedroom property was:

i.e. If you’re looking to rent a larger house or apartment, then you’ll probably be paying an extra €17 per week.