Warning to dog-owners as “harmful” material washes up at Curracloe.

Wexford County Council has issued a warning to dog-owners to be vigilant for so-called ‘Palm Oil Fatbergs’ which may be washed up along the Wexford coast, as they can be particularly dangerous to dogs. 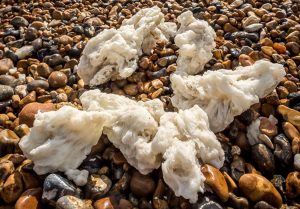 According to the Council, a quantity of the substance has recently been found at the Raven, Curracloe. While the source of the material has not been confirmed, it is believed that the Palm Oil may have part of a consignment which came off a ship in the English Channel about 18 months ago. The congealed substance has been turning up recently on beaches and coasts in Ireland and the UK following the incident.

The Council believes the “fatbergs” were washed ashore in Wexford following recent storms.

“The material is a solid white substance which is known as a ‘Palm Oil Fatberg’” said Wexford County Council spokesperson David Minogue. “Individual deposits can range from the size of a golf ball to as big as a boulder and we are asking the public to be vigilant as this substance can be particularly harmful to dogs.”